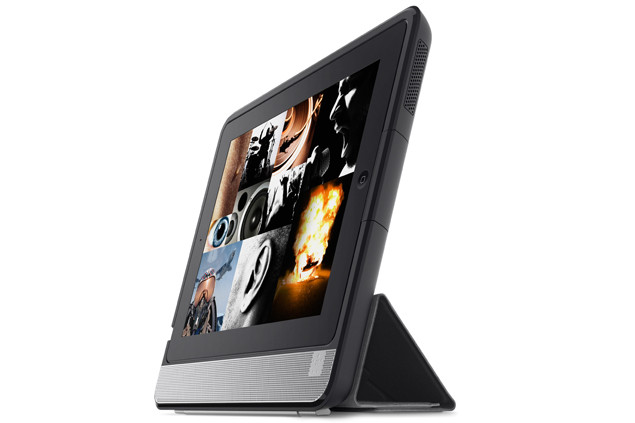 Belkin are looking to turn your iPad into a portable home cinema unit with their new Thunderstorm Handheld Home Theater case, launched at this week’s CES 2013 conference.

A speaker dock system housed within an iPad case, it features speakers and audio circuitry from Audifi, delivering front-facing stereo speakers a cut above the built-in sounds of a standalone iPad. Designed to channel air through the case, Belkin promise far richer bass response than you’d get from an iPad on its own.

Though the iPad fits flush into the case (and features the same magnetic covering to protect the screen as Apple’s official cases do), the Belkin unit still gives easy access to the camera, volume rocker and headphone jack.

Two version of the Thunderstorm will be available; one offering the old-style 30-pin connector, and the other using Apple’s new Lightning connector. Belkin are pushing a direct connection over wireless AirPlay or Bluetooth, due to the dropout of connection those methods can suffer from.

Launching in February 2013 for £179.99, it may be worth holding out and waiting to see what Apple do next with their iPad line before diving in for this unit; with the current generation iPad models sitting flush within the Belkin case, and Apple due to deliver a full refresh of their tablet device for 2013 given the 4th-gen model’s incremental upgrade, there’s a good chance this wont fit well with new Apple tablet gear sitting just over the horizon.