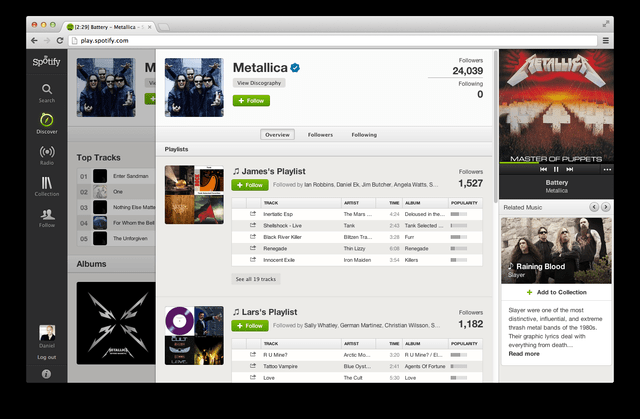 Spotify have rounded off their most successful ever year with the announcement of an elusive band bringing their music to the streaming service’s catalogue. Heavy metal superstars Metallica, a band with a notoriously icy, skeptical view of digital music and streaming, will be releasing their entire back catalogue through the Swedish music platform.

Building bridges between two warring parties, Spotify also united Napster’s Sean Parker and Metallica’s Lars Ulrich onstage during their winter press conference. The pair have been at loggerheads for years over Napster’s illegal distribution of Metallica tracks, with the band suing Napster back in the year 2000 over copyright infringement. Though the pair still didn’t seem entirely comfortable in each others presence, Parker (who now sits on Spotify’s board) and Ulrich shared jokes about their bitter feud which had lasted 12 years.

The Metallica announcement somewhat overshadowed Spotify’s other announcements, detailing a number of new updates coming to their streaming platform.

Top of the list is a new “Discover” tab in the desktop version of Spotify, which will suggest new music for listeners based on their taste. Rather than existing in a vacuum, these recommendations will come with context showing why they have been suggested. Spotify will offer reviews and artist bios along with track recommendations, detailing which artists that you’re a fan of that they are similar with, and often showing bands playing soon in your locality too. Spotify will now even tap into your personal details, such as age, reminding you of songs that you may have enjoyed during your youth.

The update will also introduce new Twitter-style following features, letting Spotify users pick artists, pals or “influencers” whose music or taste they like, and receive updates on their new playlists or new releases. In the case of bands or artists, Spotfiy uses can even sign up to have messages sent directly to their smartphones, informing them of a new release as soon as it hits Spotify’s catalogue.

Spotify’s CEO Daniel Ek confirmed the service now has more than 5 million paid subscribers worldwide, and has paid out over $500m (£311m) to record labels since its launch. When taking into account users who listen for free via the ad-supported player, Spotify has a grand total of 20 million active users.