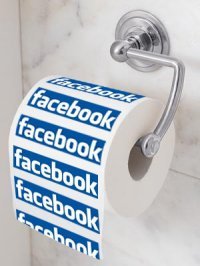 Sick of hopping foot to foot outside a toilet waiting for the previous occupant to clear out? The problem may be down to social networking.

No, not the sort of social networking that George Michael is partial to. We’re talking about people browsing Facebook and Twitter on the loo.

New research from NM Incite has shown that, in the US at least, toilet users are taking their time browsing social networking smartphone apps while on the phone, while the traditional toilet magazine rack gathers dust.

According to the report, 21% of adults in the US ranging from 18 to 24 have admitted to partaking in some form of social networking interaction during restroom breaks. 25% of individuals between 25 and 34 do the same, but the number drops to just 15-percent of people between 35 and 44, showing that social network addiction is still primarily the reserve of the young.

“Social media is truly everywhere in people’s lives. It is so ingrained and has touched every facet of everything we do all day long. We are literally taking our phones with us to the bathroom and connecting on social media.”

Could be worse. Could be “sexting”?