Bill Paxton’s memorable line as Hudson in the 1987 sci-fi classic Aliens sums up why the insectile nightmares have been such tricky foes to replicate in video games so far. Agile, deadly and near-invisible with their inky-black bodies against the failing lights of the space stations they invariably infest, developers in the past have failed to nail down their intelligent attack patterns, and failed to realise that they’re most frightening when just out of sight rather than charging at your face.

With Aliens: Colonial Marines, Gearbox Software look to have got that sense of disorientation right. During our hands-on session with an early portion of the game, we barely had time to breathe as the xenomorph creatures bore down upon us from all angles. Using a “bloodstain” system (which means the aliens will recognise which locations you’re able to defend well and mix up their attack patterns appropriately) you never can tell exactly where they are going to pop up next from, be that an underfoot grate or overhanging piping. It’s edge-of-your-seat stuff when you think you’ve got the best of a wave only to find a handful of xenos have popped up behind you. 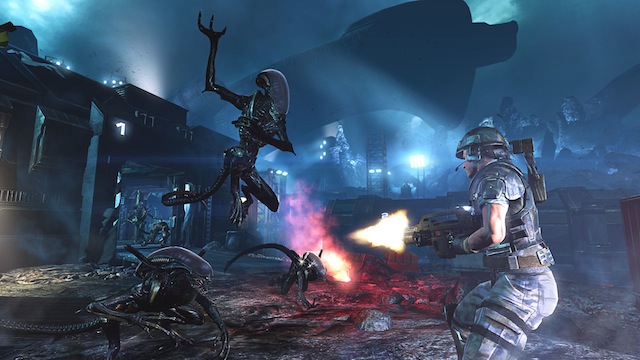 What’s less impressive is the xenomorphs’ abilities when out in the open. While the spawning AI is superb, the aliens feel a little too weak when exposed, unable to effectively avoid or counter your attacks. Once they’ve revealed themselves, its a bit like shooting fish in a barrel. 7-foot tall, terrifying-looking fish, admittedly, but it numbs the widely held belief that these are horror cinema’s apex predators. This may be down to a few reasons; being an early, easy level of the game, or Gearbox setting the demo difficulty low, or perhaps that Gearbox will throw some terrifying numbers of beasts on screen at once later in the game. Indeed, the hive-mind mythology behind the xenomorphs means they attack in devastating packs, something perhaps that Gearbox will save for later, more difficult portions of the game.

There’s also the introduction of new xenomorph creatures which may explain the default drones being so weedy. Spitters lob acid phlegm balls at you from afar, while Brutes charge around soaking up bullets as though they’re spit wads. The Gearbox devs on hand teased that, in the single player mode at least, there’s still plenty of creatures we’ve yet to see.

Even with these creative inclusions, Gearbox have done a superb job of re-creating the tone, look and locations of James Cameron’s fright-filled flick perfectly. Designed to be a canonical sequel to the 1987 movie, it’s set 17 weeks after Sigourney Weaver’s Ripley nukes the hell out of the Hadley’s Hope colony. An all new cast of Colonial Marines touch down on the planet as part of a recon mission to try to figure out what went on when, inevitably, the xenomorphs rear their heads again and all hell breaks loose. 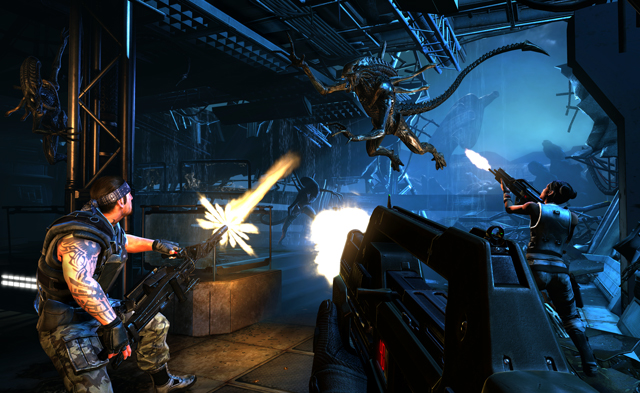 From the blue tint of corridor lighting to the exact placement of face-hugger test tubes in the medical bay, Gearbox have obviously worked in minute detail to ensure the films’s hardcore fans wont be able to argue with the recreation of the colony. Every texture and weapon model looks insanely accurate, while the iconic sounds of both the motion tracker and marine standard issue rifle are exactly as they are in the film. There were plenty of easter eggs littered around the level we played through (including the gnarly sentry guns from the Directors Cut of the movie sitting in a corridor exactly where Corporal Hicks left them), while Lance Henriksen’s Bishop also popped up, playing an as-yet-unspecified role in the story’s proceedings.

The campaign will be supplemented by a multiplayer suite, in which you can play as both aliens and marines, with each team of players swapping between each species across rounds. Xenomorphs will always be played from a third-person perspective, split into the classes detailed earlier in this post and have the ability to climb all over surfaces, making them tricky targets to pin down. It also makes them tricky characters to play as, though we’re confident this was down to a lack of experience with their disorientating movements rather than being a design or control flaw.

Both multiplayer and campaign modes will share a pool of experience points, letting you upgrade weaponry and xenomorph abilities. Though it detracts a little from the cinematic feel the game is trying to ape, the unlocks are in keeping with the mythology of the series, and will give continued reasons to re-visit the single player campaign. I’ll happily play though again in order to unlock Ripley’s DIY gaffer taped flamethrower rifle, for example. It also hints at the sort of “New Game+” mode that fellow Gearbox game Borderlands 1 and 2 benefit from, which again may lead to the sort of stiff challenge we expect from xenomorph foes. 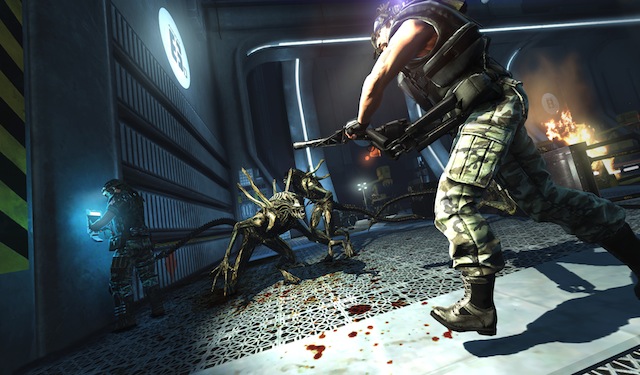 There are still some creases to be ironed out though. Our trek through the medical bay in the single player demo (a fetch quest tasking us with strategically placing motion sensors) was dragged out frustratingly by confusing map markers, while we similarly spent an agonisingly long stretch trying to find our way out of an alien hive at one point before realising we had to wipe out every xenomorph in the vicinity before being allowed to move on, with no prompt letting us know this was the case.

Also, we’ve yet to try the much-vaunted four-way co-operative play, arguable the game’s biggest draw. It’s worrying not to be able to try it this late in the development cycle, though if anyone’s got the shooter-multiplayer credentials to put your money on, its Gearbox.

All in, there are plenty of good reasons to get excited about Aliens: Colonial Marines. It’s a property that’s been left floundering in the past, but Gearbox, with a little time left to fine tune the AI, are on track to getting it right here. Whether it can meet the increasingly high expectations surrounding it remains to be seen though. If there’s one thing that an Aliens game should portray, it’s a sense of powerlessness, and my experience with the campaign made me feel just a little bit too much of a badass. It’s miles away from being Game Over (man), but Gearbox will need to ramp up the challenge the xenos present if we’re to be completely sold.