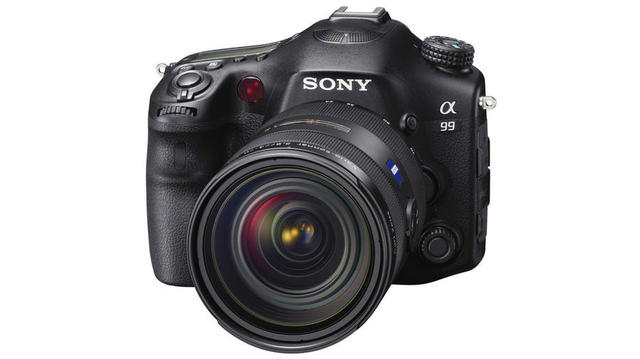 Aimed at pro photographers and seen as something of a successor to the a900, a700 and a77 models, the a99 is a 24.3MP snapper that uses translucent mirror technology with a full-frame sensor, keeping the mirror fixed so that a proportion of light can leak in, something not easily done with a DSLR.

A new Bionz processor is onboard, allowing for speed frame rates of up to 10fps, as well as the grunt to pump out 14-bit raw output, ISO sensitivity of up to 25,600 and full HD video recording. There’s also a multi-segment optical low pass filter, photo diode expansion technology and light concentration tech. It’s a camera that means business. 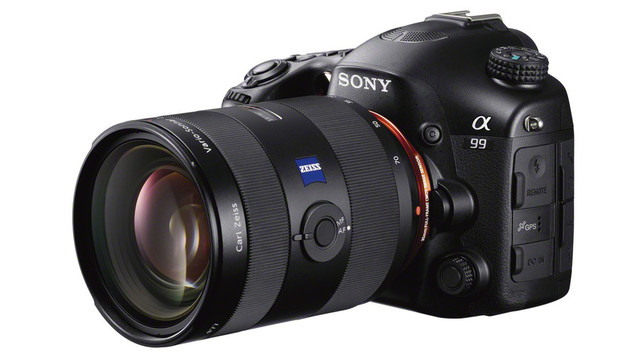 An electronic viewfinder makes use of a 2369 dot OLED, while a 3-way 921k dot file LCD preview display sits on the rear.

A 19-point AF system is onboard with 11 cross sensors, alongside a multi-point focal plane phase detection AF sensor that has 102 AF points, overlaying the main image sensor. This allows for “ultra-fast, accurate autofocusing that maintains tracking focus even if the subject leaves the 19-point AF frame”, according to Sony.

There’s also a new AF-D continuos autofocus mode for shooting moving subjects, compatible with SAL2470Z, SAL2875, SAL50F14, SAL300F28G2, SAL70400G and SAL500F4G lenses. A firmware update set to land at a later date will expand the number of supported lenses too.

The world’s lightest full-frame camera too, complete with dust and moisture protection, the camera can take dual memory cards, loading up with either two SD cards, or an SD card and a memory stick. No mention of support for XQD cards though.

Priced around the £2,500 mark for just the body, the Sony Alpha a99 will hit stores at the beginning of November.