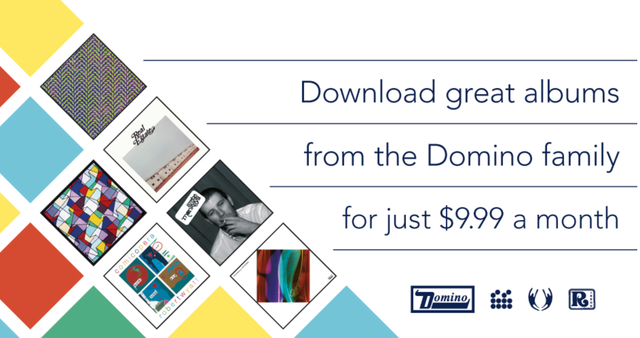 Domino has become one of the most influential record labels of the last two decades, being the stable housing Hot Chip, Dirty Projectors, Spiritualized, John Cale, Arctic Monkeys and Animal Collective, among many others. Earlier this year Domino launched a new digital fanclub service called Domino Drip, and we’ve spent the last few weeks trying it out.

Part of the Drip.fm service, a $9.99 subscription bags you two hand-picked albums and a host of bonus material each month, including classic and exclusive releases not just from Domino, but from labels Double Six, Ribbon and Weird World too.

Download links to new releases are sent directly to your inbox each month, with tracks served up in WAV or 320kbps MP3 formats. You also get the option to stream tracks, with new albums sometimes being offered up for streaming a few weeks before release. A 30% off voucher for vinyl, CDs and merchandise at Domino’s online store also becomes available after every 6 months of subscription.

There’s a feeling of exclusivity with the Domino Drip feed that you won’t get with other music services; you’re communicating directly with the label, and while the comments area isn’t quite as well populated as you’d hope for, those who are sharing their views are true, hardcore musos well up for a debate. It’s also great to get in on exclusive competitions and news from your favourite artists, with Q&As with bands and early streaming access to upcoming albums also regularly popping up.

Unlike Spotify, your $9.99 a month lets you own the music offered by the service too, rather than renting them and losing access to your playlists once you choose to end a subscription. That price lines up well against download prices for new releases from the likes of iTunes too.

On the other hand though, $9.99 gives you just two albums a month, whereas Spotify and its ilk give you access to thousands upon thousands of albums of your choosing. Remember that Domino Drip content is editorially chosen; it may be the best of the label, but that still might not be to your taste. Also, we were disappointed not to be offered more extensive liner notes; as part of a premium, exclusive, service for serious music fans, this seems an oversight.

It’s an intriguing service then, and one that really lets you show off your cool credentials. But you’ll have to weigh up carefully whether feeling like a member of a special club is as important to you as a wider selection of tunes.