Apple have lifted the covers off the iPhone 5, revealing the official specs, features, pricing and release date of 2012’s most hotly-anticipated phone.

Staying at the same price as the iPhone 4S, the iPhone costs $199 for the 16GB version, $299 for 32GB and $399 for 64GB. Pre-orders start on Friday 14th, with the phone shipping on September 21st in the US, Canada, UK, Germany, France, Australia, Japan, Hong Kong and Singapore. 20 more countries will follow next month.

Rising out of the ground of the Apple event stage like an Indiana Jones treasure, it’s the most feature-rich iOS device to date. Made entirely of glass and aluminium, it is the thinnest and lightest iPhone ever, measuring 7.6mm thick and weighing 112 grams, making it 20% lighter than the iPhone 4S. As per usual, it’ll be available in two colours too, either black or white, though the rear panels will be different on each. The white version has a raw aluminium back plate, while the black version has an anodised black finish on its rear. 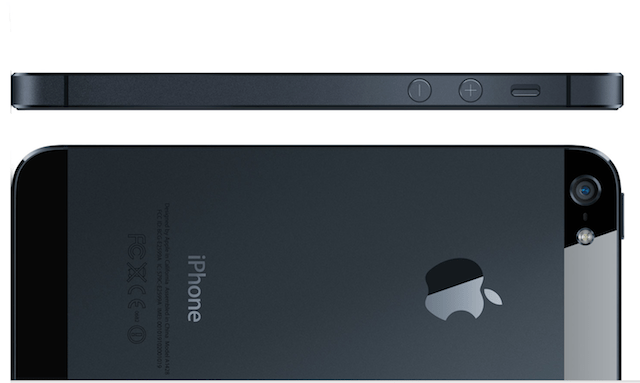 A Retina display with 326ppi again features, in a 4-inch screen of the usual width, but taller than previous iPhones. Resolution of the display sits at 1136 x 640. Closer to a 16:9 ratio than before, the iPhone 5 is now better for viewing films on, with 44% better colour saturation, with touch integrated into the display to reduce glare in sunlight.

Everything now runs off the new A6 chip, which Apple claim is 2 times faster than the A5 for both CPU and GPU processing. 22% smaller and more energy efficient than the previous chip, apps can now load as much as 2x faster. Console-quality graphics will be possible, according to EA’s Rob Murray, who demoed the Real Racing 3 app game on the new iPhone 5.

iOS 6 is the onboard operating system, which adds another row of apps on each homescreen, thanks to the longer screen, making for five app rows, plus the app dock on the bottom.It also introduces Apple’s own Maps app to the iPhone as a native, first party app for the first time. It uses Yelp data for local amenities, and includes Siri integration for voice control, and includes 3D imagery and satellite imagery too. The Safari browser gets an update too, allowing for a fullscreen view and shared tabs from iPad and Mac versions of the browser through the iCloud service. Passbook, letting you use your iPhone as a ticketing system, including airline flights, was also demoed. iTunes too gets a major revamp, with more ways to buy and streamlined track viewing and playback options. 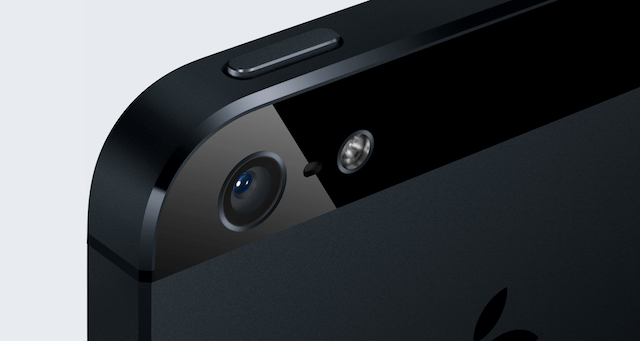 All first party apps have been optimised for the new longer display to show more information too. Calendar, for instance, now shows a full five-day working week. Old apps, however, run in letterbox view with black borders either side of the display, rather than stretched to fit. This keeps everything pinsharp at a natural resolution, but may frustrate some users. Hopefully app developers will put the time in to offer iPhone 5 optimised versions too.

Camera capabilities are also improved. It’s still an 8MP backside illuminated sensor as with the iPhone 4S, but now with a dynamic low-light mode for better night time shooting to add to the 5-element lens and f/2.4 aperture. There’s also a panorama shooting mode natively built into the camera app for the first time, with a 360-degree shot resulting in a giant 28 megapixel image. The A6 chip allows for faster photo capture too, as well as a smart filter for better colour matching and reduced noise. Share Photo Streams allow you to share photos with pals, and receive messages on your snaps too.

Video capture remains at 1080p, with improved video stabilisation and facial recognition added. The front facing camera also jumps to 720p, which makes for sharper FaceTime calls, which can now be made over cellular networks too, as well as Wi-Fi. 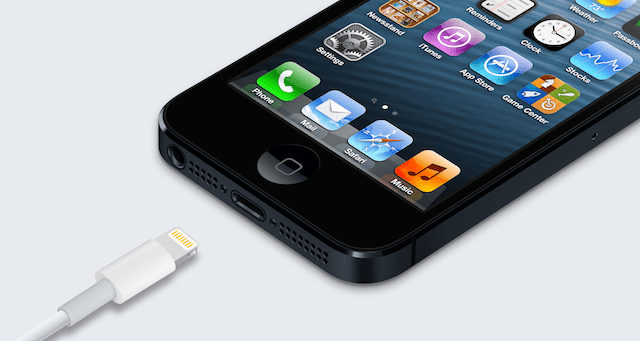 Calls themselves should be slightly clearer too, thanks to three mice situated on the front, bottom and back of the device. These should all help with noise cancellation and voice recognition with apps like Siri.

As expected, the connector for the phone changes for the first time in the iPhone’s history, dropping the nine-year old connector that first shipped with the iPod. A new “Lightning” connector is now introduced, that’s 80% smaller, helping to keep the overall design smaller, as well as offering faster data transfers, and is “reversible”, meaning it can be plugged in when either facing the front or back. Accessories for connecting to devices with the old-style dock connector will also be available.

“Ultrafast Wireless” connectivity means that LTE 4G speeds are available to the new iPhone 5, while EDGE, HSPA, HSPA+ and DC-HSDPA are all also compatible. LTE carriers include the newly announced EE 4G network in the UK, and Sprint, AT&T and Verizon in the USA. Wi-Fi connectivity comes courtesy of 802.11a/b/g/n, dual channel to 150mbps. 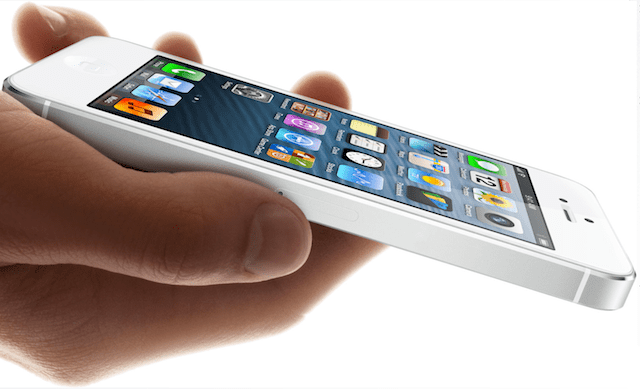 Even with LTE connectivity, 225 hours of battery life on standby are quoted, with 8 hours 3G or LTE talk time, and 10 hours Wi-Fi usage.

So, does it live up to expectations? Have Apple again laid the smartphone smack down on their competitors, or do Android handsets like the Samsung Galaxy S3, Samsung Galaxy Note 2 and HTC One X offer more bang for the buck? Let us know your thoughts in the comments area below!