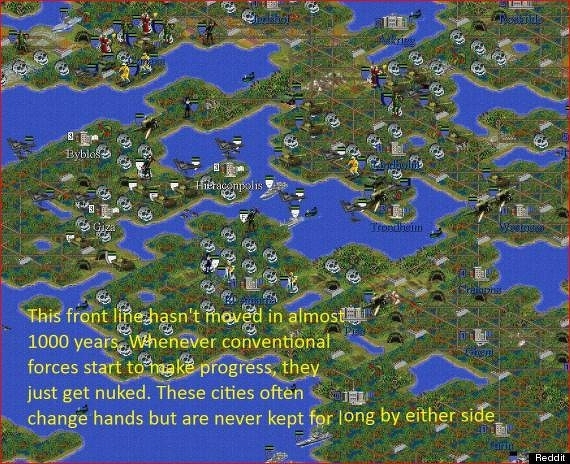 “Just one more turn,” is the regular mantra of fans of Sid Meier’s classic, addictive Civilisation strategy gaming franchise. Putting you in control of a small village and letting you expand it into a superpower, you can easily lose many hours to a single round.

But what if you lost 10 whole years to a game of Civ? that’s what’s happened to Reddit user Lycerius, who has been playing the same game of 1996’s Civilisation 2 for over a decade.

He’s managed to bring his civilisation to the year 3991. And, in his words, the year 3991 will be “a hellish nightmare of suffering and devastation” if his round proves prophetic. Of the surviving three peoples on the globe (the Americans, Vikings and Celts), each has been at war with the other for 1700 years, in an unending conflict that has irradiated the land, melted the polar ice caps and rendered crop growing impossible.

“Every time a cease fire is signed, the Vikings will surprise attack me or the Americans the very next turn, often with nuclear weapons. Even when the U.N forces a peace treaty,” wrote Lycerius.

“Big cities are a thing of the distant past. Roughly 90% of the worlds population (at it’s peak 2000 years ago) has died either from nuclear annihilation or famine caused by the global warming that has left absolutely zero arable land to farm.

“Engineers (late game worker units) are always busy continuously building roads so that new armies can reach the front lines. Roads that are destroyed the very next turn when the enemy goes. So there isn’t any time to clear swamps or clean up the nuclear fallout.”

The remaining governments have been forced to become either theocracies or, in Lycerius’s case, a communist state.

“I wanted to stay a democracy, but the Senate would always over-rule me when I wanted to declare war before the Vikings did,” Lycerius explained.

“This would delay my attack and render my turn and often my plans useless. And of course the Vikings would then break the cease fire like clockwork the very next turn.

“I was forced to do away with democracy roughly a thousand years ago because it was endangering my empire. But of course the people hate me now and every few years since then, there are massive guerrilla (late game barbarians) uprisings in the heart of my empire that I have to deal with which saps resources from the war effort.”

Despite the destructive cycle Lycerius remains hopeful for his digital world, aiming to clear the nuclear swamps and let agriculture flourish again.

“I want to rebuild the world. But I’m not sure how. If any of you old Civ 2 players have any advice, I’m listening.”

It’s an incredible gaming anecdote, and one, that at times, feels a little too close to present day realities than a digitised view of the future. Though it does make me concerned that I’ve just bought Civ V for my PC. Perhaps being late to the game in this case is a good thing!