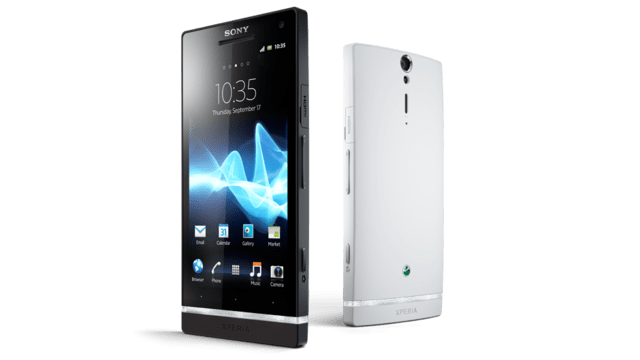 Sony’s first own-branded smartphone, and the company’s first flagship handset since the split from Ericsson, there’s a lot riding on the Xperia S. With a stylish design and a top-notch specs list, does it do enough right to deserve a reception any better than the lukewarm response to the Sony/Ericsson lines that have preceded it? Read on to find out!

Sony’s Xperia S sets itself apart from the Android-touting crowd with a keen eye for design, at least aesthetically. A glossy black front with a matte-black backing, the phone has a thin see through strip on the lower half housing the antenna. It’s a good looking smartphone, and worthy of Sony’s flagship status.

Most eye-catching of all is the 4.3 inch touchscreen up front. Using Sony’s Bravia HD technology, it’s running at a high 1280×720 pixels resolution. Pin-sharp, the Xperia S’s display is vibrant and bright, and you’ll have no problem staring at its screens for extended periods of time. It’s a beauty, up there with Apple’s Retina display.

Curving on the back, it’s a fairly big handset though. Measuring up at 128 x 64 x 10.6mm and 144g, a bottom-heavy plastic design means that it can be a little uncomfortable in the hand, sliding if not held carefully.

On the top you’ll find the power button and 3.5mm jack, with little of note on the bottom edge. On the right hand side you’ll find a mini-HDMI out port and volume rocker, as well as a dedicated camera shutter button which is always nice to see. The left hand side has a covered charging port, while a 1.3MP camera sits on the front next to the earpiece, with a 12MP camera sitting on the rear.

There are a few strange design choices here though. Firstly, the rear has a small Sony Ericsson emblem on the bottom, unusual considering the two companies have now parted ways. Also, the charging port cap is a little unnecessary, and a real pain to pop back on when you’re finished charging the phone. Most annoyingly though are the three touch buttons sitting above the antenna strip. Though their icons are actually etched into the clear plastic line, tapping them does nothing. Instead you have to push three small dots just above each icon, themselves being annoyingly unresponsive.

In terms of battery life, Sony estimate 8:30 hrs of talk time and 420hrs standby. With all the connectivity options switched on and the screen running at full brightness, we’d say that’s an optimistic estimate at best. You’ll squeeze a working-day’s worth of juice out of the 1750mAh battery, so long as you’re using the phone frugally. To make matters worse, the battery is sealed into the device, meaning no hot-swapping if you’ve got a spare handy, and no replacing it after a few years if it gets a bit knackered. 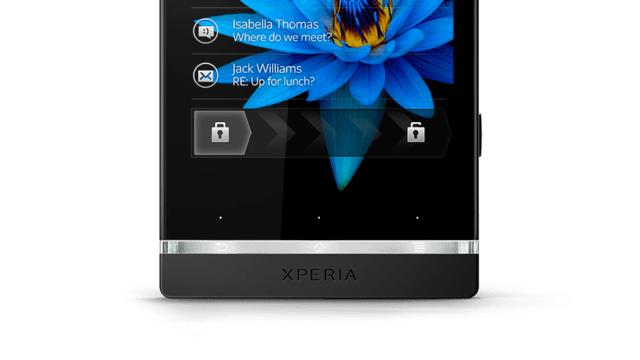 The Xperia S comes with Android 2.3 Gingerbread as its OS. That’s fine, being perhaps Android’s most well-trodden version to date, but it’s a disappointment considering how many handsets are now opting for the 4.0 Ice Cream Sandwich build instead. The Xperia S will undoubtedly get the update (the latest rumour points to a June release), but you’ll have to wait a while yet.

Sony’s TimeScape UI sits on top of the stock Android offering, and looks the part on this striking display with Live wallpapers and a clever assortment of widgets spread across 5 homescreens. From social networking aggregators to image-heavy contact shortcuts, it’s probably the best version of TimeScape yet. As with all Android devices, everything can be dragged, dropped and customised to your liking too.

Browsing the internet on the Xperia S is a joy thanks to the stunning screen, with clearly legible text no matter what the zoom level. The browser’s accurate text-reflow system makes reading longer passages simple, while full Flash support means you’re getting a full-fat web browsing experience.

With access to the full Google Play app store, you’ll be easily able to grab anything else you may need, but the pre-installed app list on the Xperia S is fairly generous. As well as the stock Google Mail, Calendar, Maps, YouTube, Voice Search and Navigation, Sony throw in a few treats of their own.

Firstly, there’s the Media Remote. It’s only of use if you’ve got a compatible Sony television, but it’s handy if you do, turning your handset into a touchscreen remote control.

Sony are also showing off their other media partnerships with the Xperia S. There’s a free Xperia Football Downloads app which has content from the UEFA Champions League, and a Lets Start PS store offering PlayStation content.

There are also portals to Sony’s Music/Video Unlimited subscription services if you’re looking to get new music or movies onto your device, as well as a lite read-only version of OfficeSuite for document viewing and Wisepilot GPS guidance if you’re not a fan of Google’s Navigation.

The Xperia S uses the stock Android address book, but gives plenty of options as to how to populate your contacts list. You can quickly fill your address book up by syncing the phone with a computer Facebook. WhatsApp, Exchange Active Sync, SyncML and Google, filling up the phone with addresses, numbers, email addresses and web links. Facebook integration also uses the “Facebook Inside Xperia” function to pull in calendar and gallery content too, which is a nice touch, though not as fully featured as, say, HTC’s Sense UI or the Windows Phone user experience. Big images sit alongside favourite people in the address book, alongside the phone and contact tabs.

Messaging is of the high standard we’ve come to expect from Android, with notifications of emails and messages easily accessed by a pull-down top drawer. Emails are handled either by the superb Gmail app, or Sony’s own app, which is equally good, though there’s no universal inbox on offer.

A strong software QWERTY keyboard with Swype-style functionality also makes tapping out lengthy messages a piece of cake, with a dependable auto-correct offering onboard. Messages can be sent either directly from a contact listing in the address book, or from any of the individual messaging apps themselves. 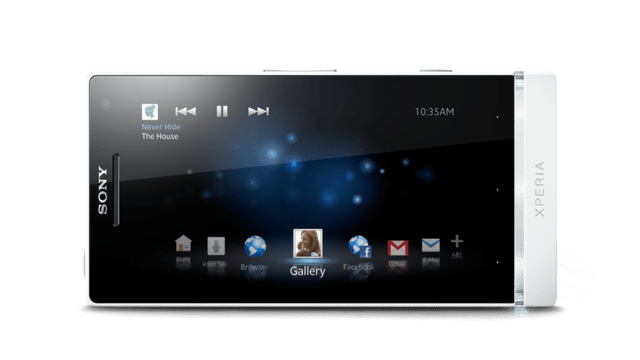 The gorgeous display on the Xperia S lends itself well to media playback, as does the dual-core processor. HD videos play without a hitch, with extensive support for all the usual file-format suspects. There’s also wide-ranging audio format support, including; MP3, 3GPP, MP4, SMF, WAV, OTA,and Ogg vorbis. There’s an FM radio built in here too.

Sony take few chances with the library player app for video content, giving thumbnail screenshots of the videos alongside some brief details of the clip. The music player app is more exciting though, with large album artwork, Gracenote integration, and links to artist info via Wikipedia and karaoke versions of your songs thanks to the wonders of YouTube . Whether you’re watching video or listening to an album, you’ll want a pair of headphone handy; the loudspeaker here is lacking any bottom-end depth, and sounds particularly tinny.

DLNA compatibility means it’s easy to share content wirelessly from the phone, particularly if you’ve got other Sony products like a compatible TV or PS3 console as part of your entertainment system. Our test stream to a PlayStation 3 worked perfectly, with not a stutter to be seen, and video scaling nicely on the 37-inch display. If you’ve got no way of using the DLNA features, there’s also a handy HDMI-cable included in the box.

With such a beautiful screen and superb media capabilities, it’s a shame there’s no microSD card support. Though 32GB is a generous amount of storage, we’d expect many users will want a whole library of HD video squeezed into the phone, which may be a struggle due to the omission. Likewise, the lack of support for Mac users will be seen as a giant oversight by Sony; Apple fans will struggle to side load media onto the phone.

Sony’s still camera on the Xperia S is a very impressive one, but that 12MP sensor comes with a concession. When shooting at the highest resolution, you’re locked into a 4:3 image ratio, rather than the 16:9 fit for the display. Drop the sensor down to 9MP and you get that 16:9 ratio at the expense for a tiny drop in pixel density, near invisible to the naked eye, but it’s worth mentioning for those looking to shoot at the maximum resolution.

Regardless, it’s a very impressive still shooting offering. Images are very sharp with superb colour reproduction, firing away quickly from the dedicated shutter button thanks to the speed of the processor. It’s a shame there’s no tap-to focus, though the phone does well to pick up key details, with both a face detection and macro modes. A strong LED flash illuminates even pitch-black scenes, giving a warm glow to shots, though obviously lacking the detail of a dedicated camera in this regard.

There’s also a decent selection of scene settings, as well as a good Panorama mode and a 3D Panorama mode which overlays images shot at slightly different angles for viewing on a 3D-capable TV screen.

Video capture, at a max Full HD 1080p resolution, was equally impressive. Though the image stabilisation option (on by default) gave results too choppy for our liking, the sensor reacted well to quickly changing light sources, leading to colourful, sharp clips. Again, there are plenty of scene setting options onboard. 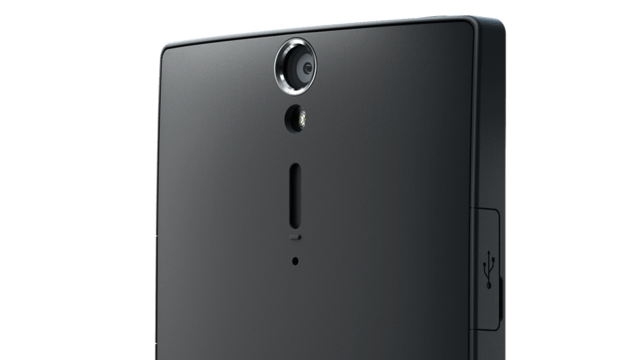 Despite a few design hiccups, the Xperia S handset is Sony’s best phone in a long time. It looks great, with a HD screen that really shines. Sony’s re-skinning of parts of Android is sensibly handled and almost always useful, while the camera is among the best we’ve seen. It’s a little uncomfortable in the hand, and the lack of a microSD slot is annoying, while Mac users should give the handset a wide berth altogether. Despite these failings though, impressive media playback mean Sony are back in the smartphone race.