The indie-gaming smash-hit lands on Microsoft’s Xbox 360. There’s a host of changes that accompany the release, but are they all good? Read on to find out if Minecraft on a console is just as engrossing as it is on a PC.

Many games labelled as “sandbox” titles in the past have claimed to offer a playground in which to let your imagination run wild, but few if any managed to offer a feeling of unlimited possibility as satisfyingly as Minecraft did when it hit first crept onto PCs in the summer of 2009. Setting players loose in an endless, randomly generated world presented in a charmingly retro way, it set no goals other than to encourage players to explore, collect resources, and build blocky structures to their hearts’ content. Digging into the ground and collecting building materials, you were only limited by your imagination, an addictive premise that many have likened to a digital Lego box. 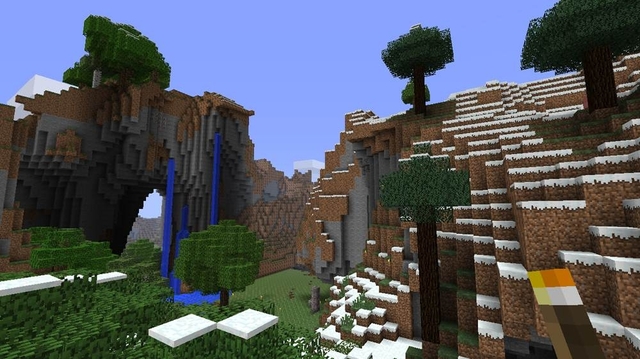 As a result, the game grew from humble indie beginnings to something of a phenomenon, with a constantly-growing, loyal fanbase creating ever more adventurous and elaborate structures. With its focus on creation over destruction, Minecraft proved a unique antidote to the repetitive, saturnine shooters that saturate game catalogues. The fact that it was made by a tiny team of (initially, at least) one developer made it all the more loveable.

After a long old wait, Minecraft has now hit the console scene too, landing exclusively as an XBLA downloadable title for Microsoft’s Xbox 360. It’s much the same as its PC counterpart, but has some excellent new additions, as well as a few sorely missed omissions too.

As with the PC version, you’ll initially be thrust into a randomly generated world, with nothing but your hands to work with. Digging into the ground will uncover resources that will let you create tools (some for better digging or wood chopping, for instance, and weaponry too) as well as different materials for building; some weak like sand and dirt, others much more sturdy like metals and rocks. You’ll then need to put these together into a protective shelter, as when night falls in the game all manner of beasties appear to try to do you and your creations harm.

Beyond that basic premise however, you’re free to travel and build as you please, digging deep underground or building towers towards the sky.

Aside from being controlled with a gamepad, the Xbox 360 edition of Minecraft introduces some welcome additions to the standard Minecraft offering. 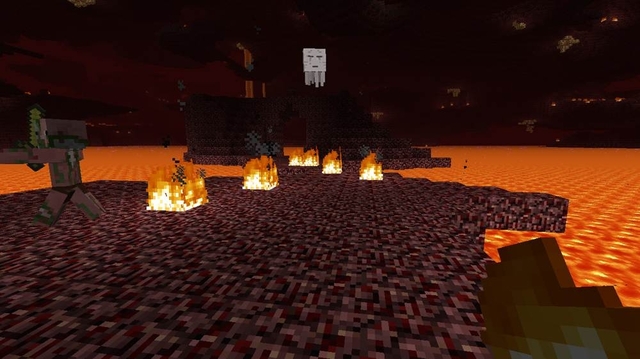 Firstly, there’s a well-crafted tutorial section opening proceedings. Upon your first play of the game you’ll be popped into a fixed map which holds your hand as you’re walked through the game’s basic mechanics. You’ll learn how to make a workbench, and of a handful of the different possibilities that the Minecraft world holds for you. Minecraft on the PC can initially be disorientating for first-timers, as there is absolutely no built-in explanation as to how the game works; here, it makes a welcoming first-impression, as you take baby steps into the expansive, deep system that underpins the game.

The same goes for item creation; on the PC it’s a trial-and-error system that sees you putting different materials in varying combinations and patterns across a 3×3 grid in order to make new tools, while on the Xbox 360 from the outset you’re given a complete list of tools that can potentially be built, with unavailable items greyed out until you gather the appropriate materials.

The changes here are a double-edged sword. On the one hand, they arguably detract from the sense of discovery that makes playing Minecraft so rewarding. On the other, it means playing with a wikipedia entry to hand at the same time is no longer a necessity for baffled newcomers. In our view, it’s an appropriate way to introduce console gamers to the vast possibilities that Minecraft offers.

One addition that will certainly be universally welcomed is the robust multiplayer offerings in the Xbox 360 edition. Up to 4 players can enjoy local splitscreen multiplayer fun here, with as many as 8 across Xbox Live. Compare this with the hassle of having to manually set up private servers on the PC version and it’s a much more user-friendly way of getting gamers together. It can’t be stressed how much more fun Minecraft can be with pals along for the ride too, multiplying the imaginative potential of your creations. 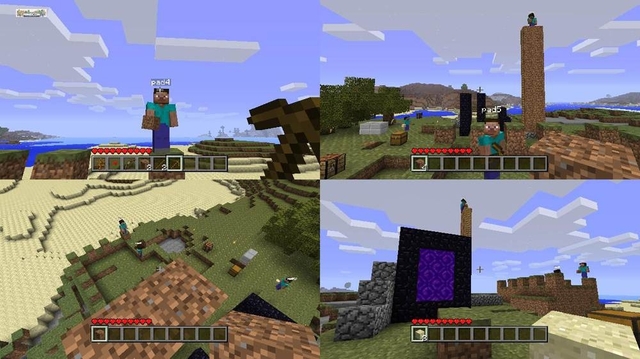 That’s not to say Minecraft for the Xbox 360 gets everything right though. For starters, unlike the PC version each map is limited to a 1000x1000x1000 blocks. There’s an expansive world to explore, but due to the limitations of Xbox 360 hardware it’s very much a finite one. Which leads on to perhaps the game’s biggest flaw; its lack of the PC version’s creative mode. In creative mode, players can fly about the map freely with unlimited resources, meaning that their wildest projects could come together quickly without the hassle of being interrupted by the aggressive nighttime foes. It’s arguably the highlight of the original game, and sorely missed here.

Likewise, the newer content that’s been introduced over the past few months to the PC version of Minecraft is missing, such as the adventure mode which introduced an “end-game” element that saw you mining deep underground to take on a final boss character. While the quality of this additional content is hotly debated, its absence is still noteworthy. 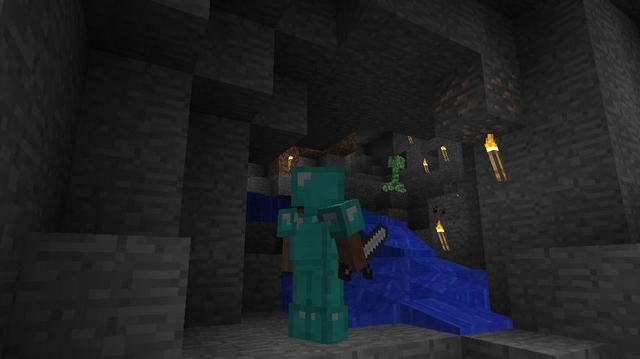 However, what’s unusual about Minecraft: Xbox 360 Edition when compared to other XBLA games is that it’s technically unfinished. And just like its PC counterpart, it may never truly be finished. The development team are forever adding updates to the PC version, and similar support is being promised for the Xbox 360 version, with updates including Kinect voice control and player skins already road-mapped for inclusion. It’s totally possible that over the coming months the few problems we have with the 360 version of the game may be ironed out, and the gaps in content filled up, which is a very exciting prospect indeed for Xbox 360 players.

Capturing much of what made the PC original so compelling, Minecraft Xbox 360 version is a must have for those who’ve yet to have the pleasure of playing the game on a computer. While the PC version remains superior, this latest console version has some clever additions of its own, not least of all the streamlined multiplayer options. PC gamers can give this version a miss, but gamers who play exclusively on consoles should have Minecraft: Xbox 360 Edition on the top of their wish-lists.