We’ve seen what the Samsung Galaxy S3 can do in our exclusive hands-on preview video, but now Becca Caddy from Shiny Shiny explores the top five reasons why the new handset could well be an “iPhone Killer”. 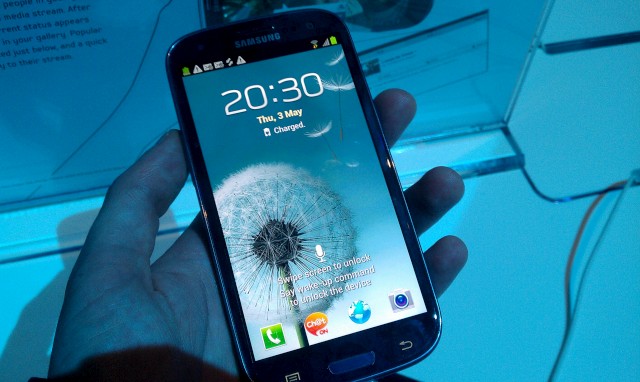 This evening Shiny Shiny went along to Earl’s Court in London for the launch of Samsung’s new smartphone, the Galaxy S3. After a presentation from the team, plenty of demonstrations and some fun hands-on time with the new handset we think we may be in love.

So, here are five (of many) reasons why the Samsung Galaxy S3 could soon be our new favourite smartphone:

We’re used to Samsung pushing the boundaries when it comes to size, just take a look at the hefty Galaxy Note and its 5.3 inch screen, but the Galaxy S3 manages to impress us without making our hands ache quite so much at a large yet manageable 4.8 inches.

The screen itself has a Super AMOLED HD display, so combine that with the impressive size and you’ve got a device perfect for watching all kinds of media content, which obviously makes everyday tasks much easier and the key features really stand out.

2. Both voice and face recognition

Although there are plenty of new features to shout about under the hood of the new Galaxy S3, it’s both the voice and face recognition that seem the most impressive at first.

S Voice is a Siri-like feature that allows you to search the web, set calendar reminders and check info on things like the weather, just by talking to the phone. It’s hard to say whether S Voice will be a match for Siri, or if we’re even THAT blown away by voice recognition anymore, but it’ll be interesting to see how S Voice fares, particularly as Siri has faced some problems over here in the UK.

The handset has an advanced facial recognition feature, which means once you’ve taken a photo of someone the clever camera will recognise them again in the future, allowing you to automatically tag them on social networks.

Throughout the presentation many members of the Samsung team stressed that the Galaxy S3 has been “inspired by nature”, and although it sounded strange to hear JK Shin reel off the random flora and fauna that influenced the design of the device it does just feel like a big, smooth pebble.

The new smartphone may not look that different from its predecessor, but although it’s a tad bigger than the Galaxy S2 it’s been made with curved edges and feels natural to hold in your hand or slip into a pocket (plz keep this one away from your bra though).

The camera isn’t just good at recognising faces, it has an 8 Megapixel sensor along with zero shutter lag and the ability to fire off 3.3 photos a second. There’s also the Best Shot feature, which takes eight photos and then picks the best one.

It may seem like a fairly minor feature, but we can’t get enough of Pop Up Play, which allows you to multi-task while you’re watching a video. You simply start watching, hit a button to minimise the content and it then plays while being overlayed on the top of whatever else you’re doing. Neat, huh?

The Samsung Galaxy S3 will be launching in 145 countries with 296 mobile operators and the 3G handset will be launched on the 29th of May in Europe, the 30th of May in the UK, and the 4G will hit North America, Japan and Korea in June. We’ll get you details about pricing and network providers ASAP.