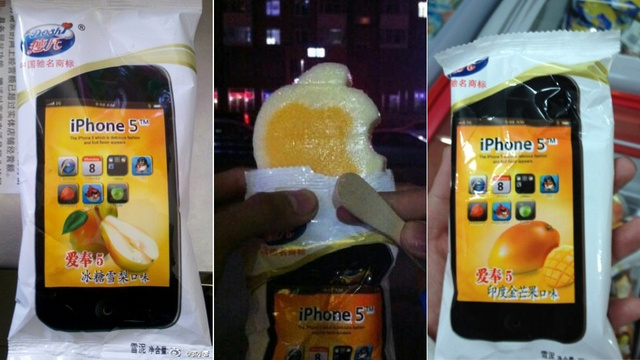 While we’re twiddling our thumbs in the West waiting for the iPhone 5 to be inevitably revealed, tech fans in China are already twiddling something else around the next Jesus Phone; their tongues.

OK, so a little explanation is needed here. Chinese tech fans haven’t actually got their hands on Apple’s new iPhone earlier than anywhere else. Instead, they’ve the pleasure of eating an iPhone 5 ice cream. It’s shaped like the Apple logo, but tastes like a mango. Go figure.

You see, whereas in the UK, US and plenty of other territories Apple’s lawyers would be slapping a cease and desist order on iPhone branded ice creams before the chilly treats even have a chance to melt, in China Apple failed to register its trademarks across a number of industries.

Therefore, Apple and iPhone branding is popping up in the most unlikely of places, and Apple are can do very little about it. China’s the place to be if you want iPhone hiking boots and iPad concrete, to use Kotaku’s examples.

Still, we can’t help but think a range of MacBook Air diet shakes wouldn’t be a terrible idea…