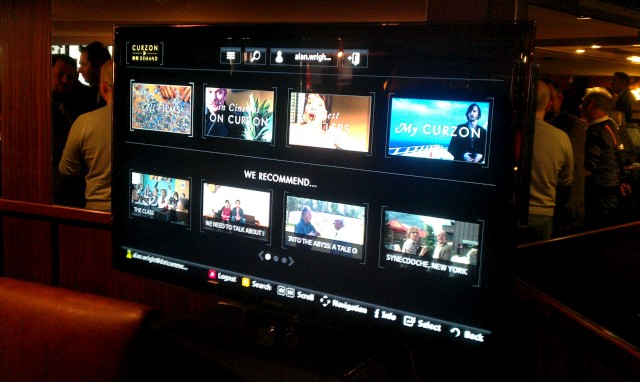 Samsung are expanding their Smart TV hub by adding a new app from independent cinema chain Curzon Cinemas. Curzon on Demand will bring curated independent and art house films to the connected TV platform, streaming in HD straight to the living room.

Though Curzon on Demand has some well-established rivals in the VOD space (namely LoveFilm and Netflix) it has a superb standout feature that sets it apart from the competition; same day releases for movies just hitting cinemas.

Using the example of Aki Kaurismaki’s Le Havre, which hits Curzon cinemas this Friday, Curzon CEO Philip Knatchbull described how users will be able to sit in the comfort of their “home cinemas” and stream new releases just as they hit the silver screen.

“I’m not going to be the friend of the multiplex cinema, as what I’m advocating is a complete paradigm shift in terms of how our customers are able to enjoy film,” explained Knatchbull.

“it won’t happen overnight and it’ll start slowly, but over the next four or five years I hope more and of what we show will be available simultaneously in our public cinemas and our home cinemas.”

It’s an exciting shift for VOD, and Curzon are in a perfect position to lead the charge. As an independent film distributor as well as cinema venue, they’re able to easily negotiate same day VOD releases for the films they’re closely linked to, and maintain strong relations with other key independent distributors as one of the few chains to champion art house cinema.

Keep in mind that Curzon, as one of the only art-house cinema chains, only have 9 cinemas (the majority of which are in London), and it’s quite easy to spot an audience not being catered for up and down the country. In this respect, independent distributors could exponentially increase their films’ exposure (and revenues) by launching same day on Curzon on Demand.

In terms of pricing, brand new releases (though currently set at an introductory £6 price) will pretty much match cinema ticket prices at £10, while classic and older titles will also be available from as little as £2. Films, once paid for, are then available to be watched as many times as a viewer wants across a 7-day period. Curzon Cinema members will also benefit from discount prices on the VOD service.

Curzon aim to have 300 movies at any one time on the service, being rotated and updated as new releases become available. While this doesn’t match the 1,000s available through Netflix and LoveFilm, it’s a quality-over-quantity approach, with attention paid to European auteurs like Wim Wenders and Jean-Luc Godard and foreign language films that would struggle to get a look in elsewhere.

Samsung Smart TVs aren’t the only potential home for the Curzon on Demand app either; having already been available for nearly a year in a beta form on computers and laptops, and hitting iOS devices such as the iPad and iPhone today, the Capablue-built app can easily migrate to other platforms. The Xbox 360, Virgin Tivo box and Apple TV were all mentioned as possible future targets for Curzon.