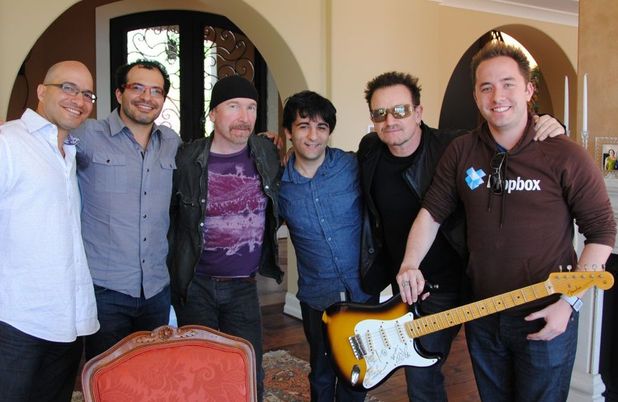 Dropbox have announced that they are to take new investment from Bono and The Edge of classic rock band U2, with the musicians giving personal backing to the online cloud storage service.

While the amount invested has not been disclosed, Dropbox founders Drew Houston and Arash Ferdowsi posed with the band members in picture posted to Twitter, confirming the news:

“Dropbox is excited to welcome Bono & The Edge as investors. Thanks for the support and look forward to great things!” the company tweeted.

It’s not the first time that U2 frontman Bono has dived into the world of tech investments. As co-founder of Elevation Partners, he has also invested in Palm, Yelp and Facebook, building a $1bn investment fund on the back of the latter two ventures.

Their early investment in Facebook back in 2004 was a particularly savvy one. Investing $270 million into the social network, an imminent IPO is expected to see Zuckerberg’s empire valued at $100bn, bagging Elevation Partners a cool $1bn. Yelp too are doing well; having completed its stock market flotation earlier this month, Yelp currently has a market capitalisation of $1.4bn.

Dropbox seems an equally well considered investment, with Forbes predicting revenues to have hit $240m in 2011 despite the fact that 96% of users only use its free service. However, with a 2GB free space limit, and file sizes growing exponentially, Houston still expects sales to double in 2012.