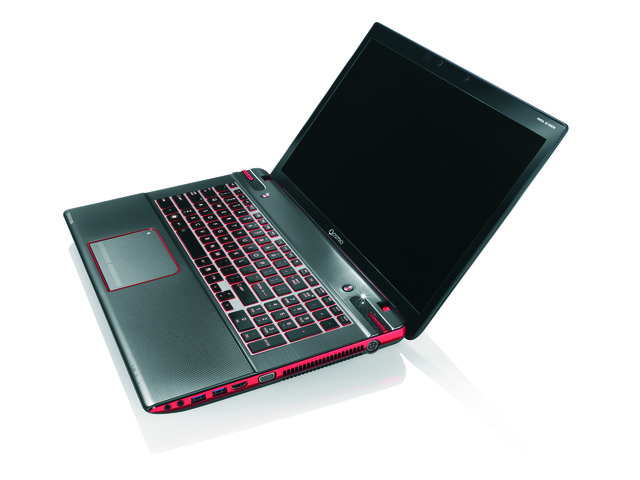 Looking for a new portable rig on which to play the PC version of Mass Effect 3? Toshiba’s newly revealed Qosmio X870 gaming laptop may well fit the bill.

Powered by “the latest” Intel processors and a NVIDIA 3GB GPU (specifics haven’t been finalised yet), it packs a 17.3 inch Full HD 3D screen, capable of playing games back in stereoscopic 3D through NVIDIA’s 3D Vision technology. The screen also has a super-fast response time of 5ms, meaning you’ll be able to keep up with the fastest fraggers on the battlefield.

Kitted out with up to 2TB of storage or a hybrid SSD option, you also get HDMI connectivity, four USB 3.0 ports and Harmon Kardon premium speakers.

In terms of design, it’s definitely taking its cues from the Alienware line, with red backlit keys on a black chassis.

Though our playtime was brief in our demo session a little earlier today, the Qosmio X870 powered through a quick play of Batman: Arkham City at 1080p resolution with in-game graphics settings cranked up to the max, proving itself a very capable performer.

No word yet on pricing, but Toshiba have the machine pencilled in for a Q2 launch, just in time for Diablo III, if we’re lucky.

Scroll down for the full spec run-down: