In a first for the series, Mass Effect 3’s first pack of downloadable content landed on launch day alongside the game. But is it worth the extra cash, or should it have been in the game for free in the first place?

NOTE: This review is only looking at the From Ashes DLC content, and as such wont go into detail on the mechanics and gameplay of the main game.

For our full thoughts on Mass Effect 3, check our complete review of the game.

From Ashes focusses around gaining the services of a new squad-mate for your galaxy-saving ordeal. In it, you’ll uncover Javik , the last surviving Prothean, whose species fought back against the menace of the Reapers tens of thousands of years ago and nearly won. They built the Citadel spaceport, were eventually turned into the creepy Collectors of Mass Effect 2 and popped their collected cultural knowledge into Mass Effect 1’s beacon which propelled Sheppard to the vanguard of the galactic war in the first place.

Taking place on Eden Prime, the very first location from Mass Effect 1, the mission to acquire Javik can be taken on any time after you download the pack.

The mission itself sees you fending off Cerberus archaeologists who have uncovered a Prothean relic site, with one of the key finds being a tomb/stasis pod, in which lies Javik. Cerberus obviously offer up fierce resistance, and you’re tasked with taking them down without harming Javik’s shelter.

Though the Eden Prime map is a little more open than other Mass Effect locations (there are plenty of shacks and structures to explore), it’s nothing that you wont find elsewhere in the game, and requires the same cover and power-throwing tactics that lead to success throughout the game, against foes you’ve probably seen a hundred times before. In this respect From Ashes is a bit of a let down, as it brings nothing new to the table in terms of gameplay. The actual mission itself is over in around 35-45 minutes, after which Javik can be called upon as a squadmate, and his laser be added to your armoury. 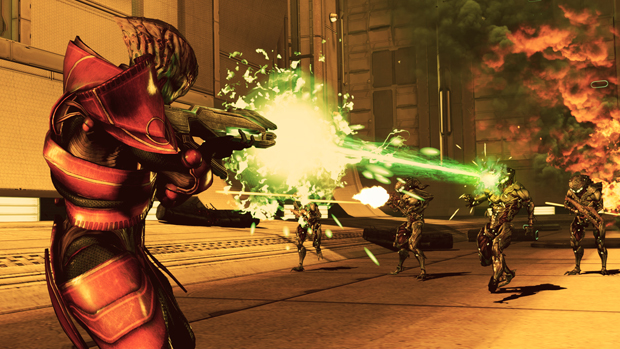 From a storytelling perspective it’s rather more interesting though. Javik is quite a prickly character (as you’d probably imagine after waking up after an aeons-long nap to find your whole race devastated), and though certainly scripted to be unlikeable, does offer a neat glimpse into the psyche of Mass Effect’s most enigmatic species.

But perhaps not in the way you’d expect: Javik is a gruff soldier, not the god-like architects of the universe we’re so often led to believe the Protheans were. That’s not to say they weren’t highly advanced, but rather that Javik is not one of their intellectual elite. Antagonistic to practically Sheppard’s entire crew, he has a particularly disillusioning effect on Liara, the blue alien history buff who has spent most of her life studying and admiring the Protheans. The exchanges between her and Javik prove to be the best moments in From Ashes.

Javik also offers quips and commentary from his quarters in the ship should you approach him across the course of the game, meaning that the DLC is most valuable if you tackle it as early as possible.

It’s also suggestive that it should always have been in the game in the first place, rather than something gamers can pop in at any time during the adventure. BioWare have been criticised for what appears to be them withholding content in order to grab a cheap buck from fans, and while it was there in the N7 collectors edition of the game, it seems a bit stingy to have not offered From Ashes up for free for all players.

Whether From Ashes is worth your money or not is solely down to how big a Mass Effect 3 fan you are. If you’ve now seen all the series has to offer, it introduces a brand new character who, while not the most affable in the universe, offers an interesting look at one of the game’s most cryptic of races. However, it’s not bursting with action, and arguably should have been included in the game to begin with. There’s some great dialogue included here, and if you come for the storytelling in Mass Effect the pack adds another layer of depth to Liara’s character in particular. On the whole though, it’s one probably best left for the inevitable DLC sales season.