The development team over at High Moon Studios struck gold when the put out Transformers: War for Cybertron. Taking the robotic giants back to their mechanical homeworld, throwing in some Gears of War style cover shooting and making liberal references to the Hasbro toy line, it’s the closest we’ve seen a Transformers game come to re-creating the joy of playing with the action figures.

Then High Moon Studios made the Transformers: Dark of the Moon movie-tie in, which was, to be generous, rubbish.

Which is why Transformers fans should be particularly excited to hear that the robots in disguise are returning in a true War for Cybertron sequel, Transformers: Fall of Cybertron. And far from resting on their laurels, the development team have scoured message boards, forums and reviews for criticisms and recommendations to ensure this latest title is the best Transformers game yet.

Picking up where the last Cybertron game left off (with the virtuous Autobots on the backfoot against their enemies the Decepticons) it’s clear that High Moon Studios are looking to address the failings of the first game. Every scene from the hands-off demonstration that we were made privy too was far larger in scale and vibrantly coloured than those of the first game. Cyberton is still a metallic, mechanical planet, but it appears to be far more visually varied this time around.

That variation is also clearly present in terms of gameplay. High Moon Studios recognised that the first Cybertron game suffered from debilitating amounts of repetition, and have employed a number of techniques to rectify this for the sequel.

First off, AI has been completely overhauled. Enemies will have more obvious tells and patterns to their attacks and movements, which should allow for greater tactical play. You’ll still (for the most part) be able to transform at will, with many different approaches offered to achieve your goals, but the new AI system should straight away guide players towards intelligent solutions to challenges.

Secondly, the story telling portion of the game will flow far more naturally. By their own admission, High Moon Studios crammed plot details into every nook and cranny of War for Cybertron, often at the expense of a players immersion into the gameworld they had created. This time around there will be more space for interactive story sections; we were shown a sequence where your Autobot discovers a high-tech planetarium-like projected encyclopaedia, with plot details revealed as you explored it.

New transformers will also join the ranks alongside returning favourites.

Of course, Optimus Prime is playable, and now has a special ability that allows him to call upon Metroplex, a city-sized robot who rains down destruction in a way similar to Gears of War’s Hammer of Dawn.

You’ve then also got Vortex (one part robot, one part jet, one part helicopter), Bruticus (a towering mech made of four separate transformers combined), Jazz (a sniper with a Batman Arkham style grappling hook) and Cliffjumper, who can turn invisible for some light stealth sequences. Switching between these differing characters over the course of the game, and mastering their unique abilities along the way, should help Fall of Cybertron avoid the repetitious missteps of its predecessor. 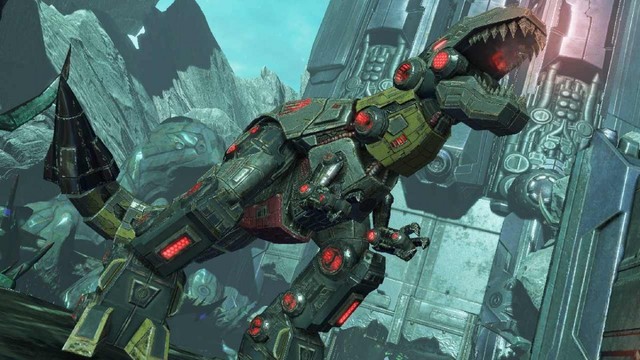 Perhaps the most exciting new cast member however is Grimlock. A true fan-favourite, the mech turns into a fire-spewing robot Tyrannosaurus Rex. As game director Matt Tieger pointed out, what’s cooler than “big f****** space T-Rex”? Playing as Grimlock too necessitates a different play style. A melee-based fighter armed with sword and shield, the steel dinosaur cannot transform at will, and instead has to build a special bar up by slaying foes before being able to turn into his tail-slashing, fire-breathing form.

With such a varied cast with a fairly diverse range of abilities, level-to-level gameplay should feel like a pick-n-mix of the best parts of the Transformers franchise.

Multiplayer is looking a real treat too. While little is known on the actual gameplay of online modes at the moment (beyond the fact that the class based system from the first Cybertron game returns), High Moon Studios have revealed an incredibly robust customization engine for the game. You’ll be able to create your own Transformer from scratch, combining hundreds of pieces with thousands of paint job options for a ridiculous number of bots to take online. The fact that (no matter which combination you put together) all the custom Transformers morph from bot to vehicle with smooth animations, the build-your-own-Transformer option is looking an incredible technical and artistic achievement.

Due out in the Autumn, we’ll have more on High Moon Studios’ promising Transformers title in the coming months.