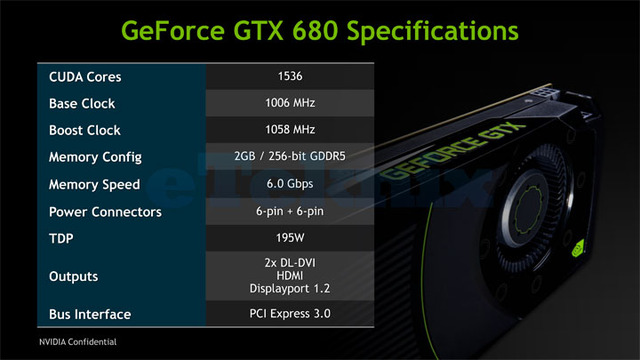 NVIDIA have revealed their first long-awaited “Kepler” GPU, detailing the specifications of the Geforce GTX680 and Geforce GT640M for laptops.

Though the reference “Boost” frequency of the card is set at 52MHz, there’s expected to be a fair bit of room for SKU’s to play about with there, allowing them to set even more impressive clock speeds. Enthusiasts will have plenty of fun tinkering around it would seem, making each blade of Skyrim grass look that fraction better!

NVIDIA also revealed the Geforce GT640M for laptops, but we won’t truly now how useful they are until we get their specs paired with those of the Intel Ivy Bridge chips. Till then, we know they’re packing 394 cores at 625MHz, backed by 2GB of GDDR3 or GDDR5 memory.

There’s a fair bit riding on the success of NVIDIA’s Kepler GPUs, following rival AMD’s succeful launch of the Radeon HD7900 series at the back end of last year. With the GTX680 landing at £420, it’s putting itself in direct competition with the equally-priced HD7970, AMD’s top-end offering.