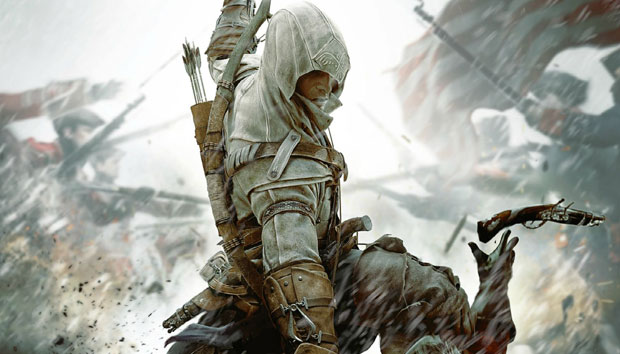 However, beyond a statement saying “We confirm that Ubisoft will announce all the details of Assassin’s Creed III on Monday March 5th at 5pm,” the French development team are staying pretty tight lipped about what to expect.

They did however release packshots of the PC, PlayStation 3 and Xbox 360 versions of the game, which look to give a few clues as to what is to come.

From the image on the packshot, it looks like the assassin’s adventures this time will be centred around the American Civil War, somewhere between the years 1861 – 1865. There’s a large American flag, historically accurate for the period in the background, while the dress of the assassin and the fallen target in the image, as well as his musket and the blurred weaponry and dress of what appear to be battling confederate and union soldiers all seem to point to the era.

Also interestingly, the assassin seems to be wielding a tomahawk, the infamous Native American battleaxe. We all know that Ezio will not be returning for another title, and if memory serves the contemporary character Desmond Miles (whom through his animus wanderings we travel back in time in the series) has Native American heritage. It looks as though we’ll be seeing a Native American lead character.

All this will likely be confirmed or denied by Monday. Head back then for the full details.