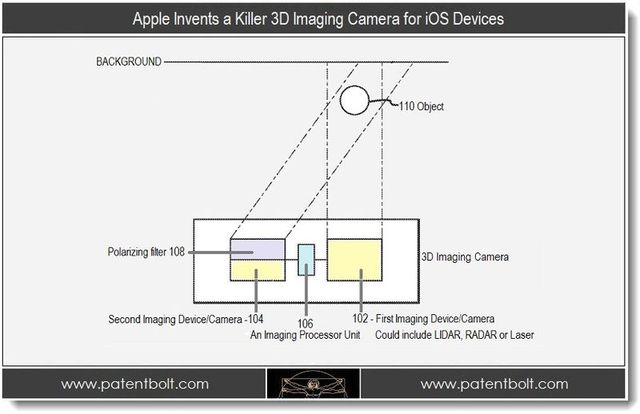 From Nintendo to LG, it seems every major tech company has been dabling with 3D products over the past few years. All apart from Apple it would seem. Well it’s emerged that even the trendsetters can be bandwagon jumpers too, as newly unearthed patents today revealed Apple’s 3D tech plans.

Apple have apparently been working on a 3D camera for their iOS devices that will blow away similar technology by the competition. Capable of both facial recognition and facial gesture recognition ( i.e triggering a snap from smiles), the 3D camera would move Apple’s Retina displays into a whole new dimension. It’d make use of new depth-detection sensors such as LIDAR and RADAR “that will create stereo disparity maps in creating 3D imagery,” according to Patently Apple. The camera would also make use of “advanced chrominance and luminance Sensors for superior color accuracy.”

According to details in the patent, Apple weren’t looking solely at their iPhones, iPads and Mac computers in regards to the 3D tech either, suggesting that Apple have at the very least considered a dedicated 3D camera.

The patent, landing in the third quarter of last year, suggests that Apple are considering the tech for inclusion in products in the coming years, so don’t expect to see it in whatever form the iPhone 5 takes.

And while Apple may have looked into the viability of a 3D system, we don’t imagine the Cupertino company jumping at the chance of putting out a 3D product into a market that, so far at least, has given the third dimension such a lukewarm reception.

Still, if there’s one company that know how to build a circus of anticipation around an as-yet-unproven, unloved technology (as with tablets and the iPad), it’s Apple, and I can think of quite a few Apple fanboy pals who’d grab an Apple 3D camera just for the logo that would inevitably adorn it.