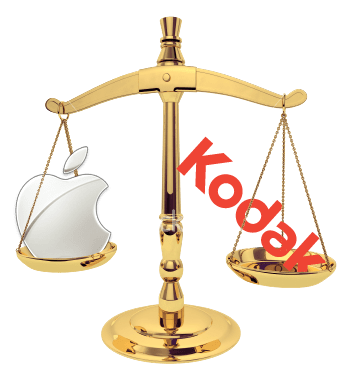 Things are going from bad to worse for Kodak in 2012. First, they had to file for Chapter 11 bankruptcy protection, which in turn forced them to announce they were abandoning camera production to focus on printer manufacturing in a cost-cutting restructuring effort.

Now they may well have to face the wrath of Apple’s legal department too, who are claiming that Kodak have infringed on patents used in Kodak’s printers, cameras and picture frames.

Apple now await approval to proceed from the US Bankruptcy court, which if given would see the International Trade Commission and the US District Court in New York step in. It could ultimately lead to certain Kodak products being removed from sale which, considering the company’s financial floundering, couldn’t come at a worse time.

It isn’t the first time Apple and Kodak have fought it out in the courts. Back in June 2011 a ruling went against Kodak, with a previous patent infringement case working out in Apple’s favour.