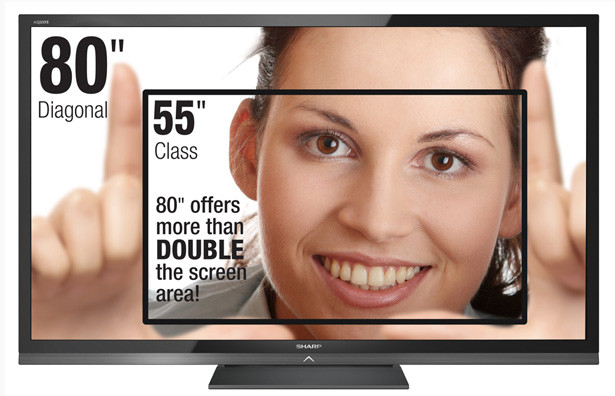 CES, the biggest tech show in the world. Where better then to more-or-less announce your new TV strategy is to make your range frickin’ massive?

Slightly smaller in scale, but ten times more likely to hit stores anytime soon is Sharp’s new flagship screen, the LC-80LE844U. An 80-inch behemoth, it has a 240Hz refresh rate for fast-moving scenes, pretty much obliterating any judder from from the LED’s 3D performance. Web-connected, the set gives owners access to plenty of apps including Netflix and YouTube.

Smaller still (but still huge by the average consumers standards) are the 20 models heading to Sharp’s 20-inch line up. These Quattron sets will feature the company’s proprietary Quad Pixel Plus II technology for improved colour accuracy.

No pricing or release dates available for the new sets yet, but it seems all-but-set that Sharp are now focussing on the premium end of the TV scale.