Offering somewhere in the region of 10 million tracks, including all the major labels, Rara.com sets itself apart by not aiming at tech-savvy musos, but those less comfortable with concepts like streaming and only a casual interest in music. It aims to achieve this by simplifying the “speadsheet” style interface of rivals like iTunes and Spotify, collecting tracks into a UI full of colourful, customisable music hubs.

Launching in 16 global territories simultaneously, including the UK and North America, Rara.com has the potential to reach 900 million users when its total roll-out is completed.

“The vast majority of music services today are designed for people who know a lot about music and are technically literate,” said founder Rob Lewis, whose name may be recognised by those who are familiar with Omnifone (the independent unlimited cloud-based music vendors) whom he also founded.

“If we’re going to make digital as mainstream as the CD was (which is what we need to do with CD revenues heading in the wrong direction), we need to reach people who know less about music and less about technology.”

According to Rara’s research, these casual tech and music users/listeners account for 80% of the potential streaming market. 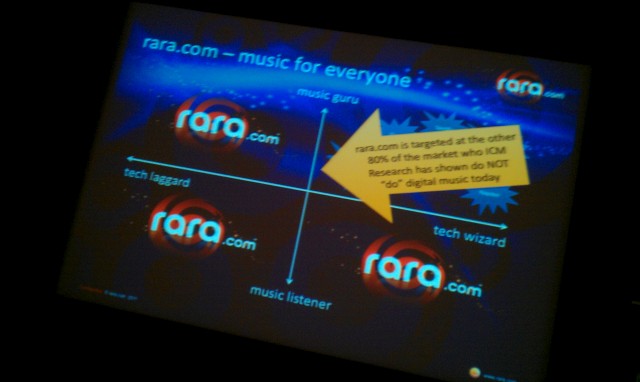 While the simple UI addresses the tech-savvyness issues, Rara are looking to a strong focus on editorial content and curation to push the service’s potential as a music discovery tool. To do this, they will be enlisting the help of a number of high-profile associate editors, kicking off with a tenure by grammy-award winning Brit, musician Imogen Heap.

“I’m honoured to be the first associate editor of Rara.com,” said Heap.

“As a musician I’ve been searching for the direction where the music industry is going to go, and how it’s going to manage to pay the artists in this ever-wider sharing, free-music-download world. I think [Rara is] really exciting; it’s very easy to use, and isn’t boring, flat and lifeless like so many players are.

“It speaks to you. I believe it’s the future of music making sense again.”

That mass-market aim will be aided by the news that Rara.com comes with one of the biggest global partners in the world of tech, HP. Rara will come pre-installed on all 2012 HP computers with a bookmark “quick-link” directing users to the web-based service straight out of the box.

As well as the browser based offering, Rara can be accessed from today in the form of a mobile Android app too, with Windows Phone 7 and iOS apps to arrive hot on its heels. The mobile service makes use of system called “Network Aware Mobile Streaming”, which can judge whether you’re on a Wi-Fi or 3G connection, and adjust the data sent appropriately in order to keep you data usage at manageable levels. It pars down the visuals to keep data usage to a minimum, and greys out functionality only available over Wi-Fi.

Tracks themselves, though varying in bitrate from device to device, wherever possible are streamed using the EAAC+ codec, a highly compressed format that still manages to keep audio quality relatively high.

Pricing also looks fairly competitive, “radical” even according to the Rara executives. To coax people into giving Rara a try, the first 3 months access will cost just 99p, and £4.99 for the months following. To add in mobile music-caching functionality to ease the strain on your data plan, those prices jump up to £1.99 for the first 3 months, then £9.99 for the months thereafter. End your subscription and a short “grace period” allows access to your saved playlists for a limited time.

Some will argue that Spotify has the upper hand here, offering a free ad-funded model to lure music fans onto their service, but Rara are sticking to their guns, believing that offering the superlative, ad-free version at a reduced price is a more tempting gateway to subscription. 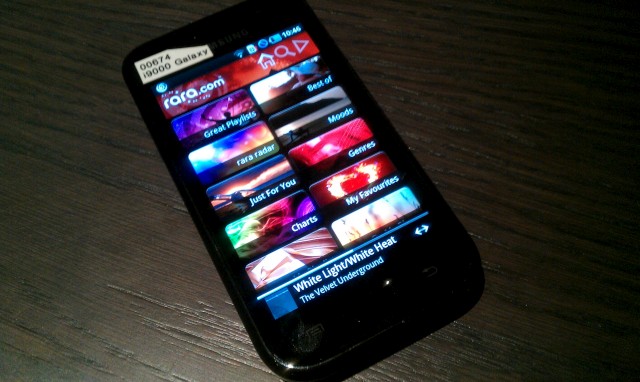 So does it have what it takes to topple the now-dominant streaming service Spotify? It’s tough to say. Rara’s main draw, in my opinion, is its colourful, inviting interface which displays its curated music. It’s simple, but still isn’t as simple as popping a CD in a player however. It also doesn’t answer the big consumer turn off; ownership of streamed tracks. You’re still effectively renting music with Rara, which even few Spotify subscribers feel comfortable with.

There’s another question too. If Rara, aimed as it is at tech dunces and casual music fans, manages to convert the masses to music streaming, what’s to say the newly-educated Rara subscribers wont jump-ship to more complex, fully-featured services? It may be more complicated, but the added features of apps, digital music downloads, a larger music catalogue to play with, collaborative playlists and deep Facebook integration within Spotify will surely begin to tempt users who cut their teeth on the simplistic Rara.

All this before you start considering the artists themselves, and the measly sums they make from music streaming.

However, Rara seem to have big plans in mind for the service. Hinting at significant announcements coming at CES, Rob Lewis made mention of plans to integrate the service into all forms of connected devices, including Blu-ray players, Sonos systems and car dashboards.

Head on over to www.rara.com to give the service a try.