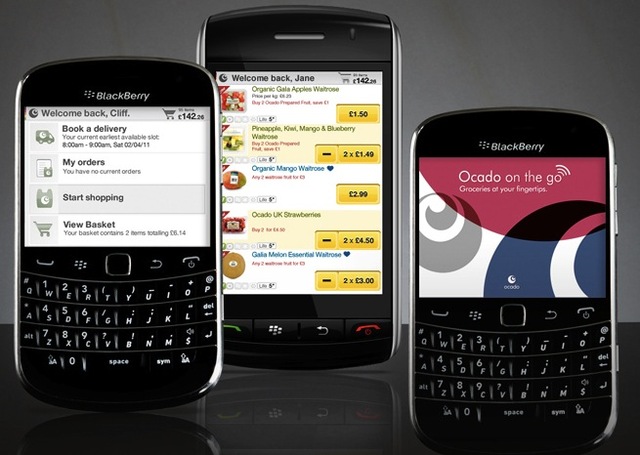 The online supermarket Ocado has released its On the Go shopping application for both the Windows 7 and Blackberry devices for the mobile shopper in all of us.

The app which has been available on Iphone and Android for some time now continues to build on the online supermarket business structure by allowing more of us to do our weekly groceries on our mobile devices. After a bit of market research discovered that 18.6% of all Ocado checkouts are now being made on smartphones rather than on computers the company has put more emphasis on the smartphone market.

Blackberry has always had the reputation of a business phone and so was a perfect choice for releasing an app for. As for Windows 7, the recent deal with Nokia to replace its Symbian operating system with the Microsoft software would have played a big part in the decision to release the app for Windows as well.

Ocado found that orders through the On the Go app where at their highest during peak travel times, showing commuters making the most of signal failures and traffic jams by ordering their shopping to be delivered at their convenience.

Supporting both touchscreen and rollerball devices the App and its features are designed to work for 30 different models and handsets and plans are already in place to introduce barcode scanning and syncing deliveries with phone calendars in the next few weeks.

The research into the shopping habits of Ocado customers also found some rather odd results in the shopping habits or those at home and those on the go. Home users would indulge themselves with purchases of home baking products, wine and butter, compared to those using the App purchasing mostly fruit, veg and fruit juices.

A logically answer would be the customers ordering from home are mostly going to be housewives or husbands who have the time to be baking and perhaps have a glass of wine while doing this, and the business people are ordering all the healthy food to make up for their lunch of McDonalds or KFC.

The App is available today for download from the Blackberry and Windows Marketplaces.