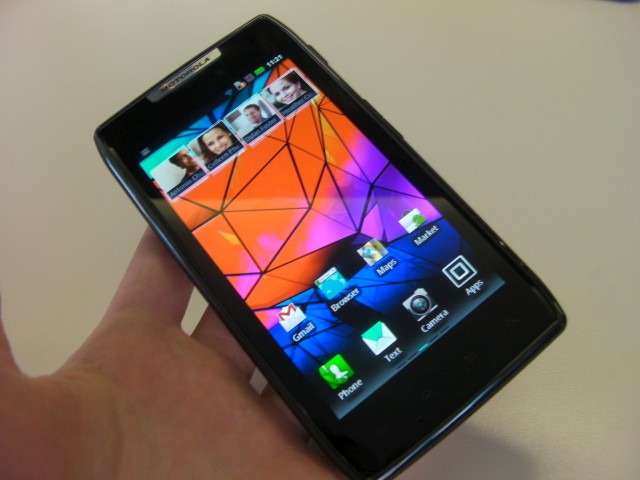 Known by some as “the iPod of mobile phones”, Motorola’s original 2003 RAZR clamshell handsets we’re the height of geek chic, selling over 130 million handsets during its four-year shelf life. The RAZR 2 series (including the V8 and V9) was also massively popular, if never reaching quite the same levels of success of its predecessor.

After stepping out of the limelight for the last few years as Motorola went smartphone crazy with the DROID range, the RAZR is now back in a sleek Android smartphone form. We went hands-on at a preview session earlier today. Read on for our initial thoughts.

Despite being feather-light in the hand at 127grams and being the thinnest smartphone on the market at 7.1mm thick at it’s thinnest point (the chunkier, curved top lip notwithstanding), the Motorola RAZR feels big. Boasting a massive 4.3″ 540×960 Super AMOLED Advanced display, it’s a real stunner that while sleek enough to fit comfortably in a pocket, absolutely demands your attention once the rich, colourful touchscreen fires up.

It’s also a bit of tough-cookie too. Not only have all connections been “splash-proofed”, the rear panel is also made of Kevlar. Yep, the same Kevlar that features in bullet-proof vests. While we wouldn’t suggest putting the handset up as a shield in front of a firing squad, it’ll certainly take a fair few falls and scrapes and come out unscathed by the looks of things. 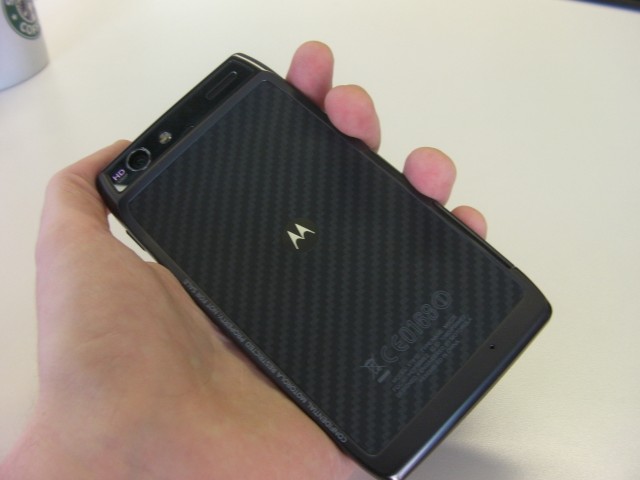 Cameras are of the 8MP/1080p variety on the rear, and 1.3MP up front. That large qHD screen came into its own when previewing snaps, and the auto stabilisation seemed sturdy, but most impressive was shutter speeds. Perhaps not quite as fast as the recent iPhone 4S, the RAZR looks so far a fine alternative to a dedicated compact, even if the digital zoom is inevitably ropey.

Under the hood is a 1.2 GHz processor, and it looked particularly zippy. With the hands-off part of today’s demo session done over a HDMI-mirroring connection with a flatscreen TV, the RAZR barely broke a sweat when playing back a 1080p video file of Toy Story 3 on the big screen.

Like the Atrix before it, that extra processing grunt comes in handy when the phone is paired with Motorola’s range of “lap dock” accessories. Using the same “webtop” interface as the Atrix, running on top of Androdi Gingerbread version 2.3.5, the phone can be used to power a screen and keyboard combo just by docking the smartphone, charging it at the same time. Though pricing hasn’t been revealed yet, you’ll get a 14‖ HD resolution screen with keyboard with the 500 Pro dock, and a keyboard/10.1 inch screen combo with the Lapdock 100 (no resolution info as of yet). 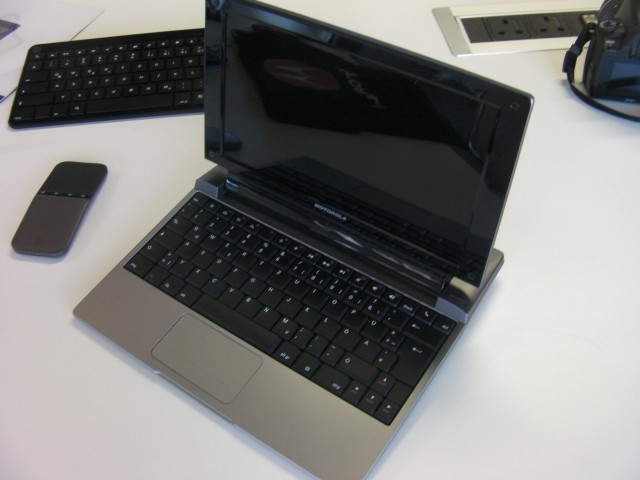 Another new accessory will be the Smart Controller; a slim, phone-sized remote that pairs with your RAZR and lets you lean back and control the smartphone from a distance when it’s being mirrored over HDMI. The Smart Controller features the regular array of four Android hardware buttons, as well as a trackpad for moving the onscreen pointer, and can even be used to take and answer calls by flipping it over.. Using a universal Bluetooth standard, there’s no reason the Smart Controller won’t work with other Android handsets that can do HDMI- mirroring too.

Perhaps the most interesting aspects of the RAZR though are the new Motocast and Smart Action features. Motocast is like Motorola’s own take on Dropbox, allowing a number of PCs or Macs to be linked to the phone, allowing for syncing of documents, photos, videos and music across devices. These files can be accessed, streamed and downloaded to local storage over 3G too, meaning you don’t need to be in range of a Wi-Fi connection to reap the benefits. Motocast is built into practically all the major applications of the phone, meaning you’ll regularly see options in the Gallery app or Music Player app to access photos or songs you’ve got stored elsewhere for instance. 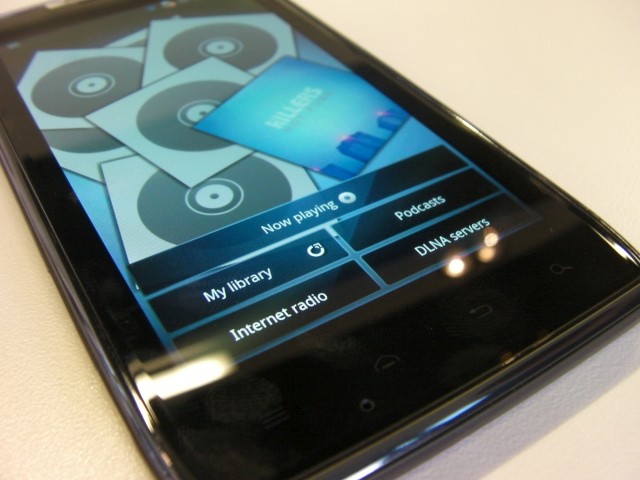 Smart Action is a similarly useful feature. It’s basically an app that allows a certain set of pre-determined triggers spark a series of actions on the phone. For instance, you could program the app to note your location, firing up the eBook reading app when you leave work, or launch the the email client when docked, or perhaps set the ringtone volume to silent between your set sleeping hours. It’s very flexible, and has the potential to largely automate many tedious tasks.

All in, the Motorola RAZR is looking very impressive. It’s been a strong year for smartphones, but the RAZR looks like it’s doing enough to make a stake on Android handset of the year polls come the end of December.

We’ll have a full review in the coming weeks, so keep an eye peeled for that on Tech Digest soon.