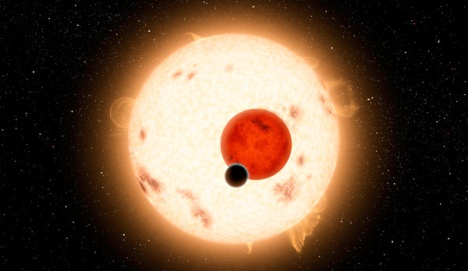 Star Wars has become such an indelible part of popular culture that it’s hard to imagine how bat-shit crazy some of George Lucas’s ideas were when the movies were first released a long time ago in a galaxy…er…this galaxy actually. I mean, Jawas? The force?? A PLANET WITH TWO SUNS????

Well, about that last one. Apparently Lucas was on to something when he dreamed up the planet Tatooine, Luke Skywalker’s home world that orbited two separate suns. NASA scientists have discovered a planet that does indeed have two different stars for neighbours, and showing their geek credentials, have been referring to it as Tatooine.

Keplar 16b, to give the planet its official name, has both an orange sun and a red sun, and is thought to be a mostly gaseous planet the size of Saturn about 200 light years away in the Cygnus constellation.

A great holiday destination for those looking to enjoy the thrills of podracing or to pick up a cheap R2 droid then. Just avoid the cantinas in the Mos Eisley district. “You will never find a more wretched hive of scum and villainy” according to locals in the know.

In other news, the Star Wars movies landed in high-def Blu-ray format this week. Grab all six movies from Amazon for £60.

One thought on “Star Wars planet Tatooine discoverd by NASA! No, seriously!!”