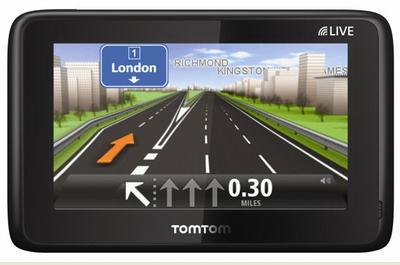 If you do a lot of driving like I do then you need a decent sat nav that will not only get you from A to B, but will make sure that you get to B before A has even realised you’ve left.

The TomTom Go LIVE 1000 is just such a device. Although it’s been available since the end of last year, prices have now dropped to around the £200 mark on Amazon, making it one of the most affordable decent sat navs around with built in traffic information.

I’ve been testing it constantly for the past few months (hence the tardiness of my review) and it’s saved my proverbial bacon on more than one occasion – most notably when large parts of the M1 were closed due to someone starting a fire under the bridge in North London. On that occasion it re-routed me off the motorway onto the A1 and then back onto the M1 further north, saving me having to set up camp on a piece of tarmac in Barnet. 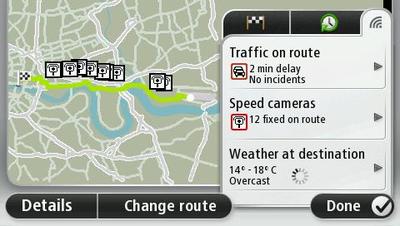 Key to the device’s success is the integration of TomTom Live. A suite of services, it’s free for the first year, thereafter it will set you back £47.50 per year (a fairly hefty amount, but crucial if your work or play depends on you being on time).

With TomTom Live you get the latest Speed Camera locations (very useful when it comes to saving you money), but crucially you also get HD Traffic which feeds live traffic information to the device and re-routes you if necessary, making sure you are on the quickest route. The reassuring voice even tells you: “You are now on the fastest route.”

Upcoming road works are shown in a bar graph on the side panel which takes a little getting used to, but basically tells you how long it is until you reach a standstill and how long you are going to be stuck there (sometimes roadworks are simply unavoidable). It’s a really useful feature especially when half the pain of travelling in the car is the not knowing whether you are going to be in traffic for five minutes or five hours.

Other features included with TomTom Live are Local Search with Google to help pinpoint shops and businesses in a given area and TomTom Weather with five day weather forecasts – though to be honest I’ve never had to rely on either.

All you need to know with the British weather is that if you are driving for more than an hour it’s probably going to rain, the traffic is going to slow down to a crawl and someone driving a BMW far too fast will spin off the road taking an old lady in a Ford Focus out in the process.

As for the Local Search, the only thing I’ve ever really wanted to know is how far it is to the nearest petrol station (I think every sat nav should have this feature as standard).

Visually there’s nothing too exciting about the TomTom GO LIVE 1000. It’s black, it has a decent 4.3inch screen and has a USB socket which fits into a cigarette lighter adaptor. Unlike some sat navs, the mount is also quite straightforward to use. It’s magnetic and comes with a screw suction mount so you can tighten it up on the windscreen without having to lick it like a giant stamp.

The only annoying thing was that because I’m one of these people who likes to carry the sat nav around rather than leave it in the car to be robbed out of the glove box, I managed to drop the cigarette adaptor on the end of the USB cable and lose it (this wouldn’t have happened if it was all one piece).

As we have come to expect from all TomTom devices, the maps look great day or night (the night mode automatically kicks in and shows the maps in various shades of blue when it’s dark). And, while the basic GO LIVE 1000 comes only with maps for the UK and Ireland, you can upgrade to the version with European maps for an additional £50. 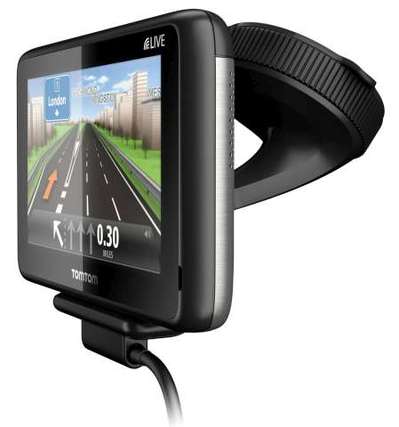 Virtually all the information you need when driving is displayed as standard on the screen, but strangely if you want to see how far it is to your destination in terms of distance, not time, you need to go into a fairly obscure ‘Status Bar Settings’ sub-menu and tick the ‘remaining distance’ option.

One interesting on board feature is the capacitive Fluid Touch screen which sounds a bit jargony but basically lets you pinch to zoom in and out of maps (like using Google Maps on your iPhone). Great in theory, but don’t try using while you are driving without risking losing your place or, worse, going into the car in front of you!

Another small-ish complaint is that it’s not always easy typing a postcode into the virtual keyboard – maybe my fingers are too fat, but I’ve yet to find a sat nav that makes this basic process easy. Instead I always end up having to get the wife to type in the postcode of where we are going.

All in all, though, the GO LIVE 1000 is highly recommended. The Live features are particularly handy for saving time on your journeys by rerouting you down quieter roads if neccessary and the maps are both clear and easy to use.