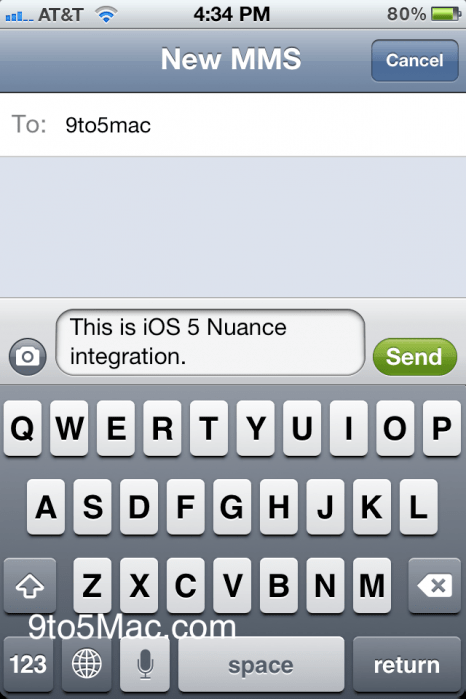 New screenshots from the iOS 5 developer code that has made its way over to 9-to-5 Mac reveals that voice control features are to play a much bigger role in the latest iteration of Apple’s mobile operating system.

The screenshots leaked show the text message entry screen, which now has the addition of a microphone button to the left of the space key. Hitting that brings a recording mic overlay onto the keyboard, which turns speech to text, remaining their until you stop speaking.

The screenshot suggests that this functionality has been developed by Nuance, the brains behind the excellent Dragon dictation software suites.

Interestingly, 9 to 5 Mac’s source suggests that this feature will not be coming to iPad. With the tablet often seen as a productivity tool hampered only by the discomfort of using a software keyboard for extended periods, further voice control integration seems like an oversight on Apple’s behalf.

This is all of course still rumour-mill stuff, but Apple’s buy-out of voice specialists Siri back in April of last year has pointed at this sort of integration for quite some time. We’d be surprised if improved voice features didn’t make the cut in some form.