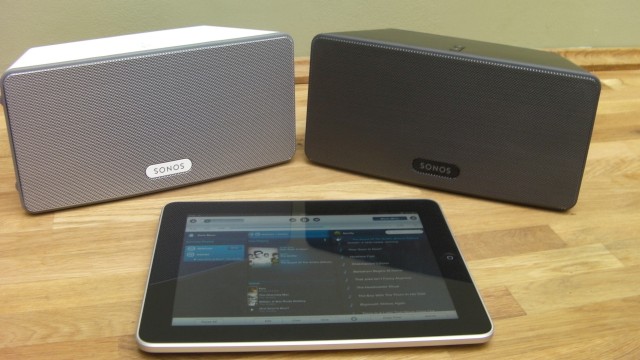 Sonos, the wireless home streaming speaker maestros, are staking a claim at smaller wallet sizes than usual with the launch of the the Play:3, set to cost £259.99. An entry level system, it not only offers bang for your buck but also introduces a new playful, simplified branding scheme for Sonos. As such, the popular premium S5 speaker gets renamed the Play:5 for instance. We went hands on with the Play:3 to see whether it can match the quality of its renamed sibling.

Packing in three Class-D digital amps, three drivers (a tweeter, two 3-inch mid-range and one passive) and a rear-firing bass radiator, the Play:3 acts in much the same way as the larger S5 (or Play:5, as it is now called). Connect the speaker to the internet via an Ethernet cable or the company’s BRIDGE device (previously called the ZoneBridge which creates its own wireless network around the house), and you’ll be able to stream music from all manner of sources.

This can include thousands of internet radio stations, Spotify Premium, Last.Fm, Napster, networked storage and perhaps most importantly, your iTunes collection. Navigating all the sources is a simple joy, wheter you use the Sonos dedicated CONTROL hardware remote, or the excellent free iPad, iPhone and Android apps available.

Sonos speaker systems come into their own however once you have multiple speakers in different rooms. You’re then able to control what source and track is playing in each room individually from the apps or hardware remote, tweaking volumes as well as setting alarms. Synchronising all the speakers from a simple button press causes no lag in sound should you want the same tunes playing throughout a house, while it’s also perfectly possible to have say a jazz room in the bathroom, an easy listening room in the bedroom and a death metal party in the living room. 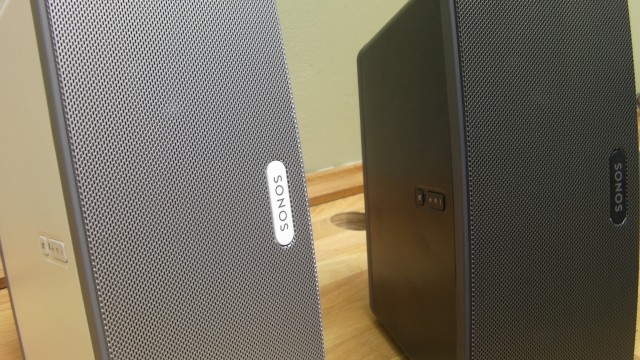 Pop two Play:3 speakers in the same room, and it’s just as simple to pair them as a stereo speaker pair, using the app to set one as the master speaker and the other as its stereo sibling. With the Play:3’s designed to be compact (measuring just 132 x 268 x 160 mm and weighing 2.6 kg), they’ve been designed to fit anywhere, available in both black and white colours, and are just as secure sitting horizontally as they are vertically. In a neat touch, a built-in accelerometer recognises the speaker’s orientation, and noticeably adjusts the way in which it throws music around the room.

As you’d expect from Sonos gear, the Play:3 speakers sounded great whatever the source, and whatever the configuration of mono or stereo speakers, horizontal or vertical. Playing everything from Daft Punk to Beethoven to Queens of the Stoneage in our short testing time, the speakers sparkled with detail and warm, rounded bass levels, going surprisingly loud without any sign of distortion. Stereo modes, as you’d expect, shone through as most impressive, and you’d probably want to nab at least a pair of the speakers as a result.

£259 is still a lot of money for a speaker, especially considering you’re going to want to snap up a handful for the multi-room stereo set ups the Play:3 deserves. However, it’s markedly cheaper than previous iterations of the Sonos gear, and apart from the absence of a line-in port, there’s very little to set it apart from their more expensive outings. Simple to set up with perfect integration of so many music sources, it’s hard not to fall in love with the Play:3.

We’ll have a full, in-depth look at all the features of the Play:3 in a forthcoming review, but for now, check out a few more hands-on pictures in the gallery below.