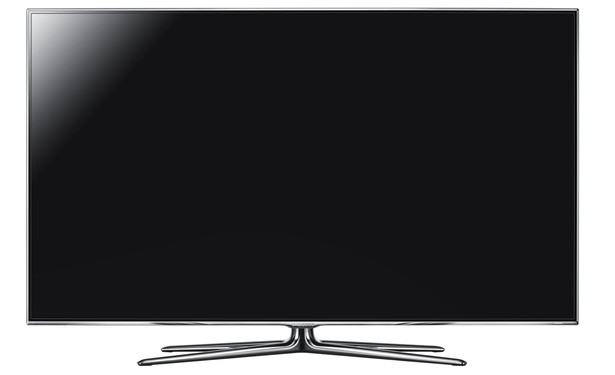 Few TVs come through the doors of the Tech Digest testing room with a spec sheet as robust as that of the Samsung UE55D8000 3DTV. From its 3D visuals to its svelte frame to the revamped online offering in the shape of the Smart Hub, it’s comprehensive in its feature set. £2,500 is a whopping price tag though. Does the TV perform well enough to justify it?

At 55 inches in size, the UE55D8000 will dominate any sensibly sized living room, but that’s not due to any excess heft. It’s a sleek and slender 29.7mm deep and weighing just 18.6 Kg with the stand attached is relatively light in terms of TVs this size (a blessing for tech journos like me that have to move these sets around a fair bit). Though not quite an edge-to-edge screen, the silver metallic bezel is so slim that you’ll at times believe you’re watching a hanging sheet of magical paper. Rear mounted connections make it perfect for wall-mounting tidily, though the screen does rotate in its stand to give the best possible viewing angle for all those watching it. That stand itself is worth a mention, being an alien-like four-pronged silver foot that’s every bit as striking as the TV it supports.

The remote control, while not quite as eye-catching, is still very comfortably put together. Complete with a backlight, it features dedicated controls to switch on and off 3D functions, as well as one-button access to the TV’s online Smart Hub and social features. It runs the risk of getting a little crowded with buttons (especially when compared to the minimalistic Philips 58PFL9955H Cinema 21:9 Platinum 3D TV remote) but we’d still liked to have seen a dedicated button for motion processing controls as they’re hidden quite deep in menus and were most often tweaked with while we tested the set.

For a TV costing £2,500 you’d want the very best in connectivity options, and the UE55D8000 doesn’t disappoint. 4 HDMI ports, 3 USB, Component In, Composite In, D-Sub, Optical Audio and an Ethernet port all feature on the rear. There’s even a headphone port humorously placed on the back, which we presume is intended for use with wireless headsets. The TV also comes with built-in Wi-Fi, which was simple to set up using the onscreen menu and maintained a consistent connection when browsing the Smart Hub platform and performing DLNA streaming, which we’ll get into in a little while. 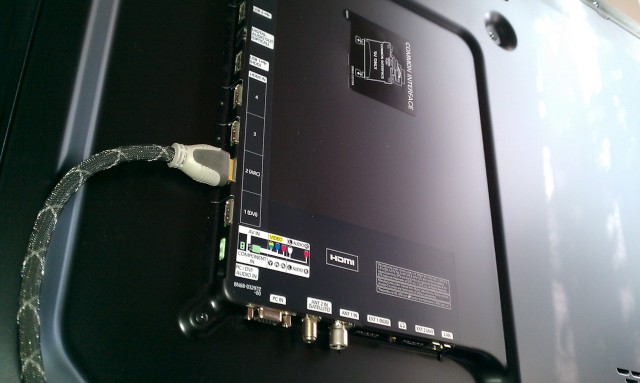 The UE55D8000 comes complete with both Freeview HD and Freesat HD tuners built in, so you get HD quality programming more-or-less straight out of the box once you’ve been through a quick channel tuning process.

HD image quality is an absolute dream on the UE55D8000. Playing back our “The Fall” test Blu-ray, it produced amazingly vibrant colours while retaining the sharp film grain that we like to see from our high-def movies. Plenty of digital noise reduction tweaks were on offer to remove the film grain if that’s your viewing preference too, though that will soften the picture somewhat. Micro Dimming on the LED display lead to class-leading black levels. If you’re not into tweaking, there are a number of preset modes to use, from “Film” to the exaggerated colours and contrast of the “Dynamic” mode, while a “Game” mode lowers the screen’s response time for twitching trigger fingered Xbox fans. The large screen size did also make some Freeview HD content look a little soft when put next to Blu-ray playback, but that’s as much to do with the quality of the source signal as the panel itself.

Samsung’s 800Hz Clear Motion Rate motion processing tech was also impressive, when used in moderation, smoothing out sports coverage effectively if making films look a little unnatural. The “High” setting should be avoided at all costs, with a “Custom” setting with the parameters set just a little over halfway optimal. When activated we did notice an unusual slow down effect when pausing and replaying live TV however, something we’ve never seen in previous test TVs, and possibly a quirk of the individual test unit we received.

Standard definition content was never going to fare well on a set this size, but the UE55D8000 does its best to clean up the picture, with images neither too smudgy when scaled nor as sharp as we’d have liked. It’s more than watchable, but HD viewing sees this screen working at its best.

3D viewing on the UE55D8000 is up there with the best we’ve ever seen from an LCD, with only minimal crosstalk. The glasses, incredibly light and comfortable, do little to dim the colour vibrancy or brightness of 3D images too. As a result, there is a better sense of depth given to the images produced. Get as close to the telly as you can for the best possible experience, and take particular care to avoid facing ambient light sources when wearing the specs as it can cause an annoying flicker effect.

However, the TV ships with just one pair of 3D glasses, which considering that the set costs around the £2,500 mark, seems a bit cheap on Samsung’s behalf. Employing Active Shutter technology, the glasses require a CR2025 button battery per pair, good for around 70 hours of 3D viewing. 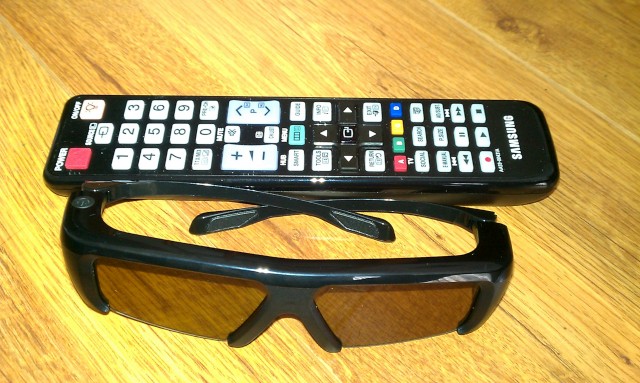 Sound quality from the set was surprisingly good for a flatscreen; given the 55 inch size, you get good stereo separation for example. Dialogue too was clear and a surprising amount of bass emanates from the slim set. It’s still however not a patch on the audio quality we once were used to on bulkier CRT TVs, and considering the money being spent on premium TVs of this nature, we’d like to see more effort in this department.

Putting the built-in Wi-Fi connectivity to excellent use is the Smart Hub, the online app and internet portal evolved from Samsung’s previous [email protected] offering. It also acts as the area to manage media playback from external sources, be that video, photo or music content stored on a USB drive or accessed via DLNA networking.

As well as offering a fully open web browser based on the Flash-enabled WebKit engine, there’s well over 30 apps available through the Smart Hub, from VOD services like LoveFilm, iPlayer, YouTube and Vimeo to social networks such as Twitter and Facebook. The increased focus on web-based video necessitates the need for a search tool, which cleverly trawls all available sources for trailers, information and even Facebook film fan pages. There’s even a handful of app games including Texas Hold Em and Sudoko, all controlled by the remote.

We had no problem playing back all sorts of video files from a USB stick alongside photos and music, be they in HD or SD formats. DLNA networking was just as easy to set up. Plugging in a USB drive to the port marked HDD also allows for Freeview HD and Freesat HD programs to be recorded and viewed at a later date.

Overall, the Smart Hub is a great success. Consolidating media playback and web connectivity into one place is a sensible and clean way of presenting the content, while the colourful visual interface is intuitive too.

The UE55D8000 is, without doubt, the finest 3D TV we’ve yet tested at Tech Digest. From the slim and silky silver design of the set, to its crisp HD images, right the way through to its comfortable 3D specs and vibrant depth-filled images, it’s a joy to watch. As ever, the speakers were a little disappointing for the money spent here, but it’s sadly a concession we’ve come to expect when reviewing a flatscreen TV. If you’ve got the £2,500 or thereabouts it’s going to cost to buy this thing, you’ve likely got a dedicated home cinema sound system to go with it anyway. All in all, if money is no option, this TV should be at the top of your tech shopping list.