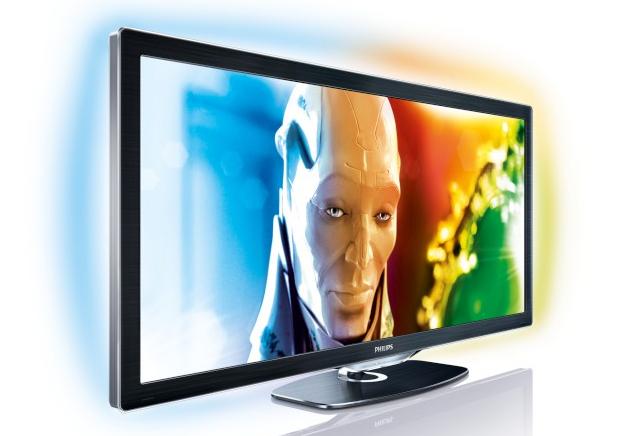 For the true movie-nut there’s nothing quite like a trip to the cinema; the smell of the popcorn machine, the sticky carpeting underfoot, the awkward teenage fumblings on the back seats, and, most importantly, the gigantic widescreen vision of your favourite directors in all their epic Hollywood glory. It’s an effect that, even with a decent projector, has been one difficult to replicate at home, but Philips have come closest to realising it in the living room through their Cinema 21:9 range. This latest model, the Platinum 58PFL9955H, attempts to improve upon the superb work of the previous versions by throwing in built-in active-shutter 3D tech.

The 58PFL9955H is terrifically wide. Whereas traditional widescreen TVs come in a 16:9 ratio, this Philips set sports a 21:9 ratio at a 58-inch diagonal size instead. In effect, this means you get a match for the super-wide cinema style format, minus the distracting black bars at the top and bottom of a DVD or Blu-ray movie. It comes in at around 2.39:1 in terms of width, as close as any TV has come before to 2.35:1 cinema film transfers. While purists will bemoan the fact that no Blu-rays truly take advantage of the size (due to the black bars being added at the mastering stage to fit more traditionally sized screens), the Philips set masterfully processes the source signal, cleverly adapting it to the 21:9 screen. It is truly cinematic and a joy to watch movies on.

Likewise, the screen cleverly handles 4:3 and 16:9 signals. You can force the screen to keep each source signal to scale within the confines of the 58-inch display, putting the black bars left and right of 16:9 or 4:3 sources, distort the images to fill the entire screen, or choose completely unscaled images from the original source. The wealth of options is both necessary and pleasing, though it can become a little fiddly if you’re quickly jumping from movies to something shot in anything other than the 21:9 format. The screen can also be set to automatically recognise the screen size, and adjust it appropriately, though we found it sometimes erratically changed scale mid-film, which could be jarring. 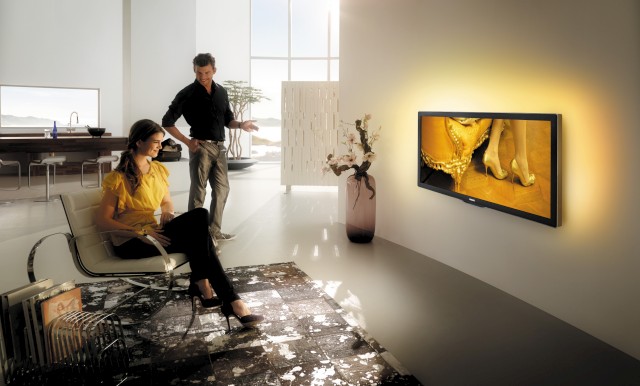 All of this would be for naught were the picture quality poor, but the 58PFL9955H truly shines in this department. Complete with 1,500 LEDs behind the display panel, the screen manages breathtaking contrast levels. We watched The Wolfman on Blu-ray with the set, and marvelled at the maintained level of detail surrounding light sources during the film’s many dark scenes. Colour reproduction is also superbly vibrant, with superb definition between shades. Of course, the screen fares significantly less well with SD broadcasts as opposed to 1080p Full HD signals, but no worse than other large HDTVs. The lack of a Freeview HD tuner is a significant omission however at this price range.

Like most top-end TV screens, the 58PFL9955H is packed to the rafters with motion-processing and screen smoothing features in the shape of the Perfect Pixel HD engine. 400Hz processing does well to remove the blur of fast moving imagery, though we were less keen on the the Natural Motion feature. Designed primarily to even out the 24fps setting of Blu-rays (less than half the speed of regular TV broadcasts), we found it made playback look unnatural if anything, doing too much to remove the actually-kind-of-enjoyable film “grain” look. It is, of course, an optional effect, and everything looks much better with it set to a “minimum” strength level. And though the viewing angle is a claimed 176 degrees, we found colours to wash-out and lose their strength considerably at tight angles. Regardless, give the set a reasonable amount of tweaking and 2D movies look an absolute dream.

The main jump for the 58PFL9955H over previous Philips 21:9 models is the inclusion of 3D technology. This is built-in rather than an optional add-on, favouring the active rather than passive standard. On the whole, it does a good job; removing the black bars from 3D Blu-ray playback of Cloudy With a Chance of Meatballs instantly made the effect feel more involving. All 3D sources however, be they PS3 gaming, Blu-ray or Sky 3D, suffered from echoes and ghosting. Rarely was it bad enough to be a deal-breaker, but in terms of 3D performance, we’ve viewed better sets. Two sets of 3D glasses are thrown in though, which softens that glancing blow a tad. 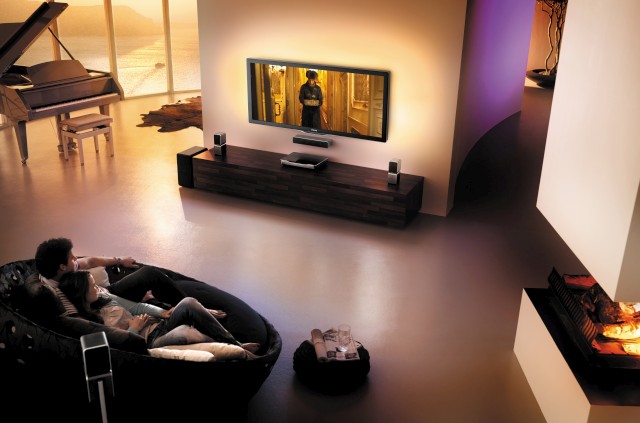 On the other hand, sound quality from the 30W speakers in the set was far, far better than any other flatscreen we’ve tried. Two rear-housed woofers gave a strong bass response, whilst a pair of forward-firing drivers offered clear voices and middle ranges with a pseudo-surround effect. It’s no match for a dedicated 5.1 system, but other manufacturers should take note of the flatscreen-sound improvements made here by Philips.

In terms of build, the Philips set isn’t the most svelte screen we’ve reviewed, measuring in at 71mm, but it’s hardly chubby either. The superb Ambilight function likely adds somewhat to this extra bulk, but it’s worth it; three bars of LED-lights sit on the top, left and right edges of the TV, which colourfully glow to match whatever is happening on-screen. It’s another immersive feature, making movie action seem to seep into your surroundings. Other than that it’s a solid build, with a thick grey bezel around the screens edge, accented by a small silver lip in the bezel’s lower-centre.

Connection options are generous with 4 x HDMI, 2 x USB, 2 x SCART, 1 x Ethernet and integrated Wi-Fi among others. DLNA networking was a breeze to set up, while we found USB video playback handled a satisfying amount of codecs (including H264/MPEG-4 AVC, MPEG-1, MPEG-2, MPEG-4, WMV9/VC1). Those looking to take their set online will be pleased by the Net TV service too. Not only does it include widgets for YouTube and Cartoon Network among others, but also access to a fully-blown Opera browser, releasing you from the Philips walled-garden of platform content.

If you’re a movie-buff, owning the Philips 21:9 is a no-brainer. It’s a luscious set that, while having specialist leanings due to its screen ratio, will blow away absolutely anyone who gives it a try. Detailed 2D images, admirable connectivity and strong sound make for a superbly cinematic experience. A few niggling processing problems and middling 3D performance prevent us from awarding a perfect score, but for regular Blu-ray viewers you just wont find a better set.