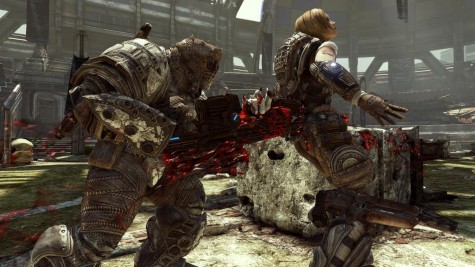 Anticipation levels couldn’t be much higher than for those being levelled at Epic Games ahead of the September launch of Gears of War 3. The final instalment in the much-lauded series that practically invented the cover-shooter, Epic Games are pulling out all the stops to make it THE flawless blockbuster gaming event of the year. Part of that process entails a public multiplayer beta testing period, an unprecedented step for the series. Tech Digest Went hands on with the gruesome shooter’s multiplayer modes yesterday and came away dripping with gory details.

Much has been learned from the troubled launch of Gears of War 2’s online modes. Severe lag, long matchmaking process times and rampant cheating initially caused plenty of heartache for series fans, but with the Gears 3 launch pushed from April back to September, the decision has been made to iron out any such creases this time around.

“We’ve been able to focus on polish” said Epic Games executive producer Rod Fergusson. “We don’t want to bloat Gears 3 out with unnecessary features. We’ve learned a lot of lessons”.

Epic this time will instead run their own dedicated servers for the new sequel. It should eliminate lengthy load times online, automatically re-assign a host gamer should the original host rage-quit, better balance matchmaking teams and remove any advantages that a low ping host once had over the competition.

But what of the gameplay itself? Though the single player mode is still a tightly guarded secret, the multiplayer elements we’ve seen so far are a familiar, bloody blast. Movement and animations seem tightened up this time around, with subtle improvements made to grabbing cover, reviving friends and picking up weaponry. Players flow and leave cover with as much grace now as these military muscle-men can manage, while an extended press for picking up dropped weapons should end the frustrating cycle of changing weapons rather than helping a downed ally.

We tested out three maps during our session; Old Town, Thrashball and Trenches, the first two of which have been chosen for inclusion in the public beta by Facebook fans of the game.

Team Deathmatch was the mode of play chosen for Thrashball and Trenches. Rather than have a simple timer and kill count, Gears of War 3’s team deathmatch mode instead opts for a limited number of respawns (capped at 15 in our session), after which each player on a team only has one life until the last man stands. It adds a nice climactic element to a mode that can otherwise end without much fanfare.

The Thrashball map itself is based around the fictional sport that Delta Squad’s Cole “The ColeTrain” once played before the war with the alien Locust. It’s something like a rugby stadium meets a battlefield, with low tunnelled areas beneath stands either side, and a fairly open area on the central pitch. In a nice touch, a scoreboard overhead the centre of the map can be dropped on opponents from above by any crack-shots able to take out its supports. The map has plenty of space for those who like to take out enemies from afar, though respawning in a locker room did mean we got the odd unfortunate chainsaw to the back. 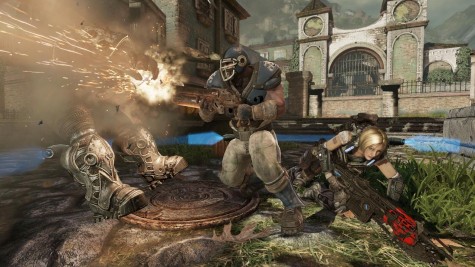 Trenches takes place in the Seran Deadlands, a desert location in which the evil Locust have carved out a nomadic existence after being forced overground. With multiple levels and runways, it’s a fine map for sneaky players who like to pick off unwitting foes below, while a central tower houses a mortar that any teams choosing to huddle together on the lower levels would do well to avoid. A siren randomly goes off mid-round, after which a sandstorm kicks in bringing visibility levels down to almost zero. It’s a great opportunity to break through enemy defences and rev a chainsaw up behind an unsuspecting enemy.

Old Town was the setting for our King of the Hill match, in which we had to capture, defend and hold strategic points on the map for an allotted time to to rack up a point threshold and eventually win the round. With cobbled streets, a lush beach, chickens and untouched rural gardens, it’s artistically the level most removed from what we’ve become used to from the franchise, and as a result a welcome change. It’s also the toughest map we played on, thanks to the many alleys that allowed for flanking, and the multiple respawn locations that regularly separated us from our pals. Making use of the left bumper, which helped you identify the location of your teammates on the map, was essential here.

Plenty of new weapons have been devised for the game, many of which have a low-tech feel in keeping with the theme of a crumbling civilisation. Our favourite two weapons however were the re-vamped sawed-off shotgun (yes we know it should be “sawn-off”, but those Gears brutes just aren’t fans of grammar), and the Digger launcher. With Epic now seeing shotgun usage as a more valid online play style, the weapon has been fine-tuned and balanced with others in the armoury. You now have to get within almost touching distance of an opponent to give them the full effect of the sawed-off shotgun, but if they get caught in the blast they’ll drop like a squidgy heap of offal.

The Digger launcher, while almost wholly impractical during our session, was so much fun we couldn’t help but picking it up each time it was available. Shooting a missile that tunnels under the ground, it bores a Bugs Bunny-style dirt trail towards your enemy before exploding below them. It’s easy to avoid with a quick evasive roll, but manage a direct hit and the missile continues up out of the ground and through your opponent before finally causing their head to explode. Ouch.

All in all, it’s looking great fun, with Epic having really nailed what’s made their series so popular for so long and ramping all the online action up to 10. As we mentioned earlier, all that we’d seen during our session will soon go public, so here’s how you too can get involved.

To get access to the multiplayer beta you must pre-order Gears of War 3 from Game or Gamestation, who will then provide you with a code to be entered on Xbox Live. Alternatively, if you purchased the Bulletstorm Epic Edition you’ll also nab yourself one week’s worth of access to the Team Deathmatch modes on the new maps.

Running from 25th April to 15th May 2011, playing the multiplayer beta will give you access to exclusive in-game items and characters come the 20th September retail launch of the game, including flaming or gold weaponry and a Thrashball-kit-wearing Cole skin.