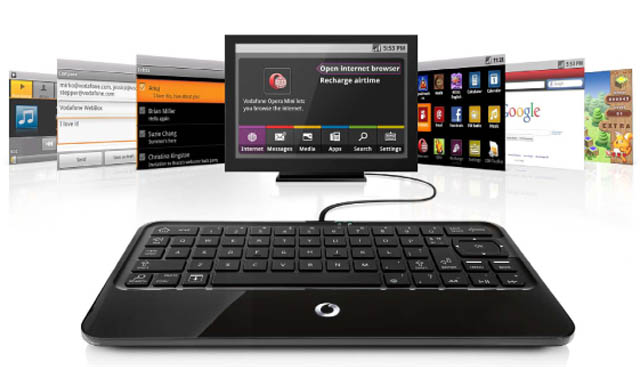 Aimed primarily at the developing world, Vodafone have taken the wraps off a new keyboard PC that brings the internet to anyone with a TV and access to 2.5G or EDGE networks.

Called the Webbox, the device plugs into your TV via RCA connectors, while there’s space for a Vodafone SIM card inside the keyboard itself.

As well as having a version of Opera’s Mini 5.1 browser for surfing, it is also able to send SMS and email messages.

There’s some pre-loaded games and apps, along with a photo gallery tool, media player and a built-in FM radio.

While the lack of 3G connectivity means it’s going to be pretty slow for anything other than basic browsing, Vodafone hopes the straightforward device will give people in emerging markets the opportunity to get online in places where web connections are scarce.

The Webbox will be first available in South Africa from next week for around £50 and comes with a free 2GB SD card and data purchased on a pre-paid sim.

It’s expected to reach other markets at some point in 2011, but there’s currently no word on whether it’s coming to the UK.