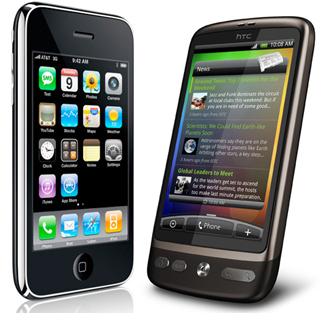 The iPhone is sliding down the list of most popular smartphones, according to new research by uSwitch.com.

Deciding the most popular handsets based on sales as well as web interest and search traffic, the iPhone 4 is now the sixth most popular smartphone in the UK behind four Android phones and one BlackBerry handset.

HTC have all three top places in the list, with Android packing Desire, Desire HD and Wildfire phones leading the pack.

The latest iteration of the Apple smartphone, the iPhone 4, was marred by signalling issues upon launch, while its key new hardware and app feature (FaceTime video-calling) has failed to set the mobile world on fire.

Android phones however now have a healthily growing app ecosystem (once the iPhone’s unique calling card) and are significantly cheaper than Apple hardware, with consistent critical acclaim dished out to the HTC gear in particular.

The Top Ten Most Popular UK Phones according to uSwitch are: