Any slate that’s going to stand a chance of toppling the mighty iPad from its lofty perch on top of the tablet pile will have to fight Apple’s “magic” machine on two main fronts: specs and pricing. While the Linx Commtiva N700 doesn’t really stand toe-to-toe with the iPad in the first respect, it’s a relatively capable tablet at an incredibly competitive price.

At 7-inches in size (179.4 mm x 110 mm x 11.5 mm to be exact), this tablet most closely resembles the Samsung Galaxy Tab, if a fair bit chunkier and with a similarly thick bezel. The similarities are furthered by the OS on-board, the Froyo 2.2 version of Android, while the official Android Market app store also features. A generous black leather portfolio-style stand/case hybrid is thrown in for good measure. 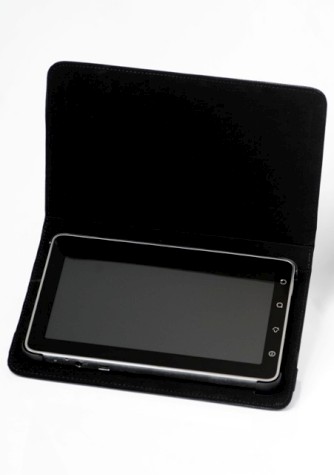 The most obvious budget saving cutbacks have come in the form of screen resolution, processing speed and storage space. The capacitive multitouch panel runs at 480 x 800 WVGA, the Qualcomm MSM7227 processor is clocked at 600MHz and the built-in storage is a measly 512 MB (though a 4 GB microSD card is supplied in the box). These aren’t device breaking limitations (the screen is sharp enough to read quite comfortably, though has a tight viewing angle, and the processor can handle all but the most intensive tasks), but the N700 certainly lacks the premium feel of its rivals.

However, there’s a lot working in its favour too, particularly in terms of features missing from the iPad. You’ve got a 3G connection that is missing from the entry-level Apple tablets, a 3 MP camera on the rear and modest front-facing one for video chat, expandable memory from microSD or SDHC, and even the ability to make calls providing you don’t mind either hooking up a Bluetooth headset or holding a book-sized device next to your ear. When it’s not getting one up on the iPad, you’ve also got GPS/AGPS connections, 802.11b/g Wi-Fi, and an accelerometer and compass, with charging and syncing carried out nice and simply over USB.

The N700’s implementation of the Android OS is also commendable. On the left-hand side of the first homescreen are shortcuts to mail, media, ebooks and the web browser, while the right-hand side has a button to access the full apps library, another browser button and phone controls. You could argue that controls limit customisation of the front screen (particularly given the chunky left bar can’t be removed) but we found them quite useful overall. The app library is displayed in a rolling carousel, while te regular Android hardware buttons for Home, Menu, Back and Search sit embedded on the bezel and can be set to optionally vibrate when touched.

Temperamental touchscreen response is probably the biggest let down of the N700. Tapping out messages or activating smaller web buttons often takes some patience, and while multitouch gesture controls are present, the likes of pinch-to-zoom are hindered by the underpowered processor. Again , it’s not crippling, but those used to the silky smooth feel of browsing an iPad will be disappointed. Using the pre-loaded Swype speed-typing app for instance is rendered all-but useless.

Though the standard media player was a little fussy when it came to playing back certain file types, a quick browse of the Android store will find you a comprehensive, and often free alternative. We sideloaded Vplayer onto our N700. Standard definition content was fine, with the odd hiccup if we were running lots of things in the background, but don’t expect to get HD videos playing here. The lack of Flash support is a shame too, as it would have been a very bold one-finger salute from the little guys to Apple’s strict “no-Flash” policy on their devices, despite consumer demand. The speakers were actually surprisingly crisp for music and movie playback too, lacking a little in bass, but rounding the N700 up into a rather nice media playing device, easily competing with the mid-range Archos units.

It’s nowhere near as slick as the Samsung Galaxy Tab, let alone the iPad, but there’s something very endearing about the N700. To be honest, it’s mainly that price tag; under £250 would be a steal for a Froyo smartphone, let alone a tablet, and while it has its quirks, the N700 does enough right to warrant your attention. It’ll be completely overshadowed by the next wave of Honeycomb tablets, and even now it stands in the shadows of its big-brand rivals, but that’ll likely work in your favour, driving the already-low price of this solid bit of kit down even further.