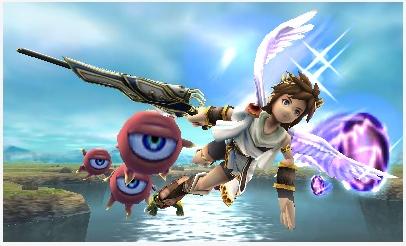 Kid Icarus: Uprising has been one of the Nintendo 3DS’s most often showcased launch titles, and it’s easy to see why. A fast paced and colourful shooter, it brings a fan-favourite franchise bang up to date after a 19-year absence through the console’s use of autostereoscopic 3D. We played through the entire first chapter at the 3DS launch event in Amsterdam.

Of all the launch games we tried, Kid Icarus stood out as one of those where we least felt tempted to slide down the 3D effect. The 3D doesn’t feel merely a novelty here, but genuinely immersing you in the action by helping you pick the most troublesome targets more accurately. 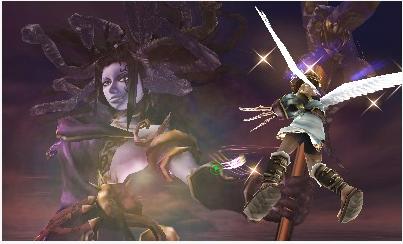 Gameplay is split into two categories; on-rails flight sections and 3rd person ground shooting. In both areas the 3D looks great. The exaggerated ancient Greek architecture of the on foot missions is leant an unexpectedly grand sense of scale by the extra dimension, while flight sequences are most impressive of all, with the kooky frog-like enemies of Chapter 1: Second Coming of Palutena really feeling more threatening as they dart from the distance to the foreground.

Graphically it’s very impressive too. Detailed textures allow you to pinpoint minute houses and landscape features below as you fly rapidly past. Lighting effects from weapon blasts and enemy attacks also flash satisfyingly, while character design, most notably the towering form of an angry Medusa -ike figure, so far seem very creative. 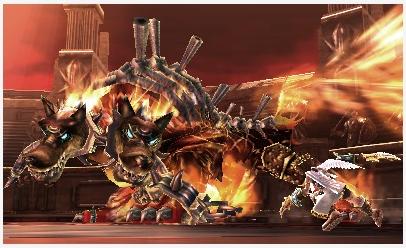 Controls during flight sections work comfortable enough, with the analogue stick moving lead character Pit around the top screen, firing blasts with any trigger or face button, while the touchscreen and stylus are used for aiming projectiles and triggering special moves. It’s a little more clunky on foot, with the analogue stick moving Pit forwards, backwards and strafing left and right, while turning, quick-turning, aiming and special moves are all mapped to the touchscreen. It makes the lower screen area a little busy; we found ourselves often accidentally triggering special ranged blasts when all we wanted to do was quickly turn.

All in, it was an enjoyable, if brief, look at Kid Icarus: Uprising. We’re a little worried that the on-foot sections may frustrate as the difficulty ramps up in latter levels, but the on-rails flight shooting sections were a visual and twitch-happy treat.