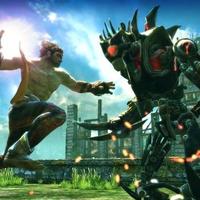 Name: Enslaved: Odyssey to the West

Though it may seem a little premature to be getting all festive, the start of October marks the beginning of the holiday quarter. In gaming circles, the run up to Christmas normally means just one thing; a whole load of sequels to established franchises, looking to cash in on mums and dads filling stockings with familiar names. It takes a brave developer to throw a brand new IP into the fray at this highly competitive time of year, but that’s exactly what Ninja Theory have done with their latest adventure title, Enslaved: Odyssey to the West. But does bravery necessarily equate to quality?

The answer here is mixed. In terms of production values, this is one of the most ambitious titles we’ve seen all year. You’ve got an all-star motion captured cast, including Andy “Gollum” Serkis (who is also co-director for the game), an Alex “28 Days Later” Garland script and some of the most dramatic and vibrant visuals we’ve seen in quite some time. However, there are also plenty of annoying gameplay issues that drag things down too.

(Scroll down for more pics)

That Alex Garland-penned story is probably a good place to start with Enslaved. Set 150 years into a future ravaged by war with man-made machines, civilisation is now just crumbling cities overgrown with lush foliage. The few humans that survived the war live in fear of the roaming robots and slave-trading gangs. You play the brutish-but-nimble Monkey, who having escaped from a slaver’s airship is then forced into the servitude of fellow survivor Trip, who attaches a controlling headband to our protagonist that will kill him in the event of her death or should he not help her get back to her tribe.

It’s a very narrative-driven and cinematic tale that does more to compel you forwards through the adventure than anything else. Serkis does a good turn as Monkey, and the blossoming relationship between our hero and his captor Trip is handled very nicely. It’s also choc-a-bloc with Hollywood-standard set pieces, giving the tale an epic quality.

But it’s that beautiful-yet-destroyed world that’s the real star of the show. Rather than a grey and gloomy post apocalypse, Ninja Theory envision a world where plant life has taken over from concrete. Towering trees cut through the wreckage of skyscrapers, while rapid waterfalls pour down onto city streets. It’s refreshingly colourful despite the sober story, and you’ll often stop just to stare at the breathtaking surroundings.

Thankfully, the majority of the game is spent traversing this wild terrain, with environmental puzzles of the Uncharted sort featuring heavily. Monkey clambers and climbs all over the show, swinging from pipes, hanging from branches and tiptoeing across vertigo-inducing high-wires. It’s when you start putting Monkey through his gymnastic paces however that Enslaved’s problems start to rear their heads.

Firstly, Monkey can be a little bit flaky when it comes to movement. He’ll jerk forward with just a tap of the control stick (particularly annoying when attempting to delicately make your way through minefields) and often has to stand in far too particular a spot to jump from one ledge to the next. You’re hand-held through the environments and these precise, locked-in leap points only act to highlight that. You’ll often want to explore a nook that seems perfectly within reach, only to be denied access to it as it’s not part of the very linear route intended. Likewise, moments when you have to team up with Trip to solve a puzzle often require overly-precise context sensitive spots to proceed.

Camera angles can also be an issue. The fixed, cinematic points are fine, but the standard camera hugs too close to Monkey, which neither lets you fully enjoy the stunning views around him, nor is particularly helpful during combat.

Fights vary between ranged shootouts and mech-on-man brawls using Monkey’s staff. You’ll collect orbs along the way that will let you upgrade and improve Monkey’s move-set, but the melee combat can be sailed through with button mashing alone either way. Boss fights offer more challenge, often requiring you intelligently use your surroundings to fell them, and the odd mech gang will have shields or have you pinned down with gunfire that will take a distraction command from Trip to take down, but overall it lacks refinement.

If I’m being a little harsh with Enslaved, it’s because it houses such massive potential. Visually it’s stunning, and it’s great to have a brand new IP on the market in the sequel-heavy run-up to Christmas. While the presentation and story telling are top-notch, gameplay however is neither fresh nor polished enough to warrant classic status, with movement controls and camera angles all too often fall on the wrong side of irritating. And though I’ve praised Ninja Theory earlier on in this review for having the guts to put out a brand new IP at such a competitive time of year, I think it’ll be Enslaved’s inevitable sequel that will see this new franchise truly shine.

Buy Enslaved: Odyssey to the West for £35.91 from Amazon by clicking here