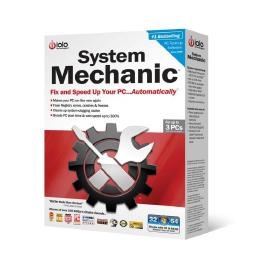 Iolo Technologies are just putting the finishing touches to their latest version of PC tune-up software System Mechanic, which they’re claiming is the most comprehensive performance enhancing tool your computer can get its hands on without resorting to electronic steroid abuse. We met up with the team in London yesterday to see some of the new features of System Mechanic 10 in action.

We’re not going to focus on what’s been previously available in other versions of System Mechanic (you can check that out by clicking here). Instead we’re going to dive straight in on version 10’s new features.

This latest release introduces a new Program Accelerator feature which tidies up a previously unknown area of PC slowdown. Ever notice how, no matter how often you defrag your PC, some programs still take way longer to load than they did when you first installed them? Well according to Iolo Technologies, it’s because most defraggers work based on ageing principles.

Traditional drive defragmenting apps work by ordering file fragments spread out across your storage drive so that the mechanical disk doesn’t have to jump around so much to access the information it needs quickly. This worked fine back in the early late 80s and early 90s when most programs were single, large .exe files. However, these days a program is made up of so many multiple components that many defraggers fail to order the fragments efficiently, and over time, slowdown still occurs. System Mechanic 10 on the other hand is able to identify which components are related to each other, and group them together to improve performance, sometimes with drastic results.

Another new feature is the CRUDD unused software detector. It rounds up all the unnecessary bloat-ware that has accumulated on your PC, from packed-in trial software to those annoying browser toolbars, displays them according to size and how often you use them, and then allows you to remove unwanted software completely.

Iolo Technologies have also extended the licence of the software beyond the standard 3 PC maximum, so that System Mechanic 10 can now be used to care for as many computers as your household keeps. Those upgrading from any previous version of the software can also do so free of charge.

We’ll have a full review of System Mechanic 10 soon, ready in time for its late September release.