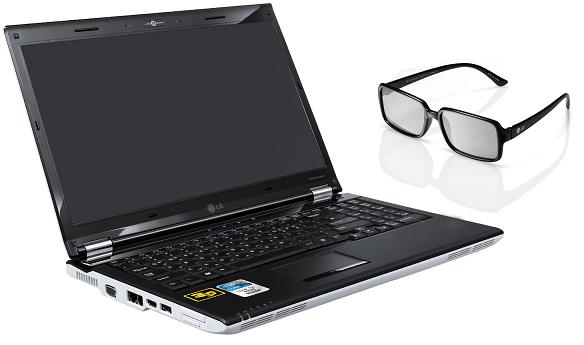 LG have announced the launch of a trio of new 3D hardware. From projectors to notebooks, it looks as though LG are setting their 3D sights well beyond merely 3D TVs in your living room.

First up is the LG R590 3D notebook. Featuring a 15.6 inch display and Intel Core i7 processor, it also packs in a NVIDIA GeForce GT335M graphics card, with 1GB of dedicated DDR3 video memory. It’ll come with a pair of polarisng glasses thrown in for the 3D content (much like the ones used in cinemas) and will feature TriDef real-time 2D-to-3D video conversion software.

Next up is the W63D monitor, aimed squarely at gamers. Full HD, it has a 70,000:1 contrast ratio and 120 Hz refresh rate. It also features a “G-Mode” gaming option, which intelligently controls brightness to reduce eye-strain.

Last up is the CF3D projector. The worlds first polarized glasses 3D projector capable of transmitting full HD 3D images through a single lens, it can throw out images 200 inches in size with a 3D brightness rating of 1250 ANSI lumens (2500 in 2D) with a 7,000:1 contrast ratio. It generously ships with 6 pairs of polarised glasses too, meaning the whole family can get in on the 3D action.

The LG R590 3D notebook is launching first in Japan, with a global release in the next few weeks. The other two items should be rolling out in the near future.