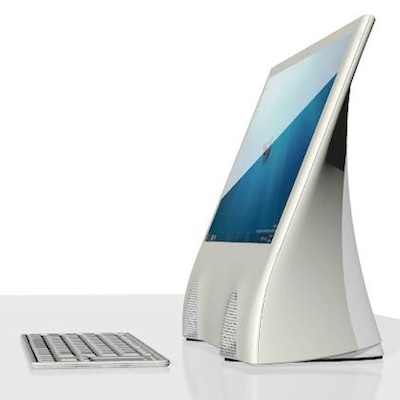 Following the massive success of Windows 7, Microsoft have begun making preliminary plans for what the Windows 8 operating system will be like. And, from the looks of a leaked presentation online, they’ll be taking their cues from Apple.

The presentation for computing giants HP revealed many secrets waiting in the wings for Windows 8. Perhaps most intriguing of all was a Windows 8 app store, featuring apps from Microsoft and other developers in a Zune-like interface, suggesting that Windows 8 will to some extent be tablet-centric.

This tablet-focus was further re-enforced by a series of renders of Windows 8 concept machines featuring touchscreen controls that looked more than a little like iMac designs.

Facial recognition and cloud-based Office 2010 web apps will also feature more heavily than ever before, with clues pointing towards implementation of the Xbox 360’s Kinect motion-sensing technology at some point too.

A slide titled “How Apple does it: a virtuous cycle” explicitly shows Microsoft’s desire to capture some of the circus-like excitement surrounding Apple’s product launches. But perhaps Microsoft are being a little modest here. Microsoft are reporting some 150 million sales of Windows 7, a staggering figure, so they must be doing a lot right still.