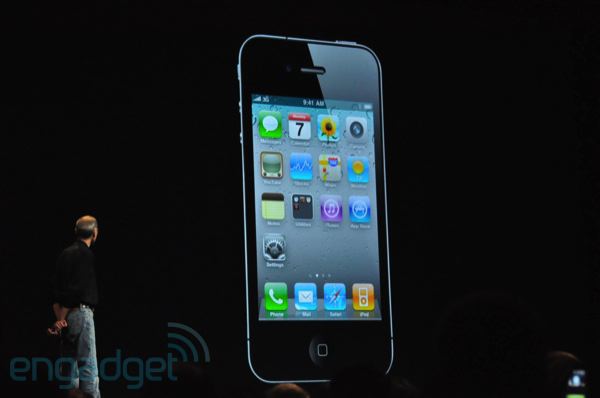 WWDC 2010 kicked off with a keynote speech from Steve Jobs, who dropped the bombshell that Apple are to release a brand new iPhone model, the iPhone 4. Ok, so seriously now, while we were all well prepared for that particular “revelation”, it did give the Apple head-honcho a chance to talk attendees through the new smartphone himself, revealing a few new nuggets of info that we didn’t yet have and clarifying some of the rumours that we’d previously heard.

The thinnest smartphone on the market, it features glass on the front and back, a front-facing camera and steel trim. Yep, it’s nigh-on identical to the Gizmodo leak, but did you expect otherwise? Remember those little ridges in the edge of the iPhone 4 leak? Turns out they’re to do with boosting the reception signal for calls, using the band as part of the antenna. 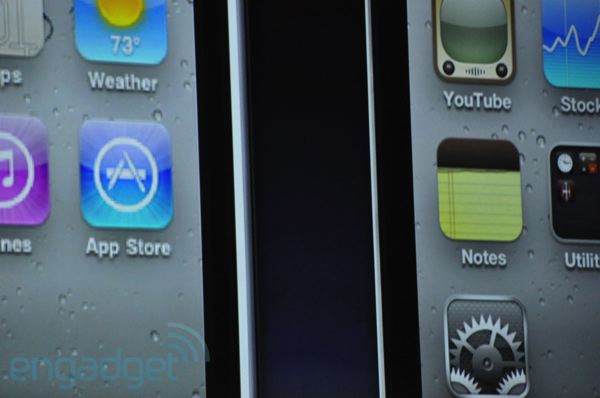 Apple are calling the iPhone 4’s screen a “Retina display”. 3.5 inches in size, it features four times the density of pixels as the previous iPhone model, allowing for sharp anti-aliasing techniques in 3D graphics, as well as a far more responsive and precise touchscreen than in previous models. There is 326 pixels per inch in the display, which is mighty impressive. Contrast ratio makes a 4x leap to 800:1, while the overall resolution is 960 x 640. Text and apps will look noticeably sharper straight off the bat, and should look down-right jaw dropping with a little bit of work on the behalf of their development teams.

The iPhone 4 is powered by the A4 chip, as seen previously in the iPad. A larger battery now allows for 7 hours of 3G talk, 6 hours of 3G browsing, 10 hours of WiFi browsing, 10 hours of video, 40 hours of music and 300 hours of standby time, a vast improvement over previous iPhone models. There are dual mics, 802.11n WiFi, GPS, compass and accelerometer, with Quad band HSDPA up to 7.2 Mbps download and 5.8 Mbps up. It’ll all be environmentally friendly too with no arsenic, BFR or mercury used in production. In terms of storage, they’ll come in sizes up to 32GB, which is a bit disappointing to be honest, considering the 720p video recording onboard (more on that in a second). 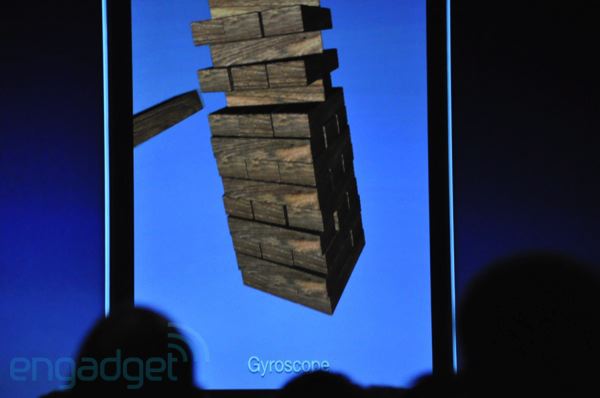 Yep, you read that right; the iPhone 4 has a gyroscope built in. The 3 axis gyroscope was demoed with a “Jenga” style game, so expect many gaming apps to employ that particular feature in the future. Not really sure how useful it’ll ever be though, unless you’re a trapeze artist or something similar. 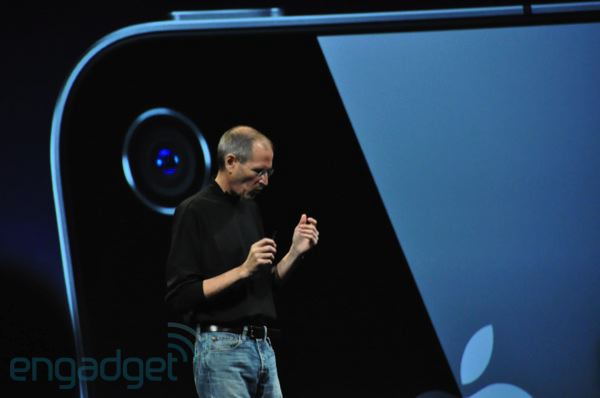 In terms of still pictures, the iPhone 4’s 5 mega-pixel stills are a big improvement over the 3GS, but will hardly set the world of photography on fire. LED flash and “tap to focus” have also been included. The biggest improvement here comes in the shape of HD recording though, shooting 720p at 30fps. There is built-in editing software for trimming clips, and within a few taps of the screen your videos can be sent via email.

iMovie for iPhone 4 is looking pretty impressive too. Transitions, timelines, themes, the ability to export in a range of sizes; it’s looking like the most comprehensive mobile editing package we’ve seen on a smartphone yet, and all yours for just $4.99.

iPhone OS 4 is now called iOS4. As expected, multi-tasking made an appearance “People said you weren’t the first, but we figured it out” said Jobs “If you don’t do it right, you kill the battery”, all whilst checking his mail, listening to music and browsing the web at the same time. Folders will allow you to group apps together, freeing up the home-screen real estate. 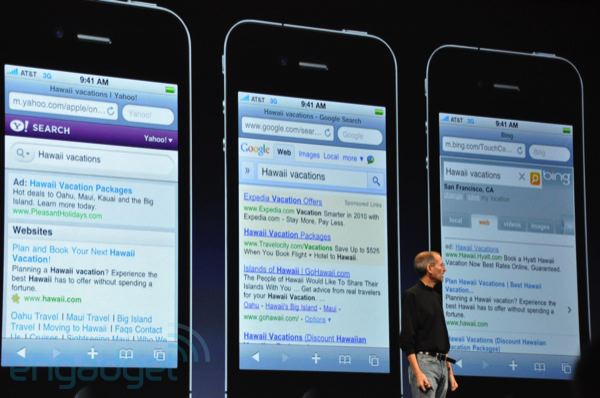 We’ve known relations between Apple and Google have been strained recently, and while many had expected the Cupertino giants to drop Google Search as the default search provider altogether, Apple have made a sensible compromise. iPhone 4 users will have the option of either Google, Yahoo or the Microsoft-owned Bing as their default search engine. “Microsoft has done a great job on this. Check it out, it’s kinda cool,” said a coy Jobs, neither endorsing Microsoft fully or completely running down Google either. Smart move.

iBooks, Apple’s ereader app that’s proving very popular on the iPad, will be headed to iPhone 4. The iBookstore will be available to buy new ebooks from direct to your mobile, and will sync bookmarks and notes across both the iPad and iPhone. Also, any book previously bought for an iPad will be available at no extra cost on your iPhone 4.

Not a game-changer if you’re on the fence about buying an iPhone 4, but iAds is definitely good news for app developers. It’ll bring in-app advertising to the iPhone, with the likes of Nissan, Citi, Unilever, AT&T, Chanel, GE, Liberty Mutual, State Farm, Geico, Campbells, Sears, JC Penny, Target, Best Buy, Direct TV, TBS, and Disney all already signed up to advertise through the service. Ads will be interactive, and will allow consumers to jump straight to product purchase pages. Jobs demoed an interactive Nissan add for their new Leaf motor, stating that only iPhone users will be able to purchase the car thanks to the unique advertising strategy. 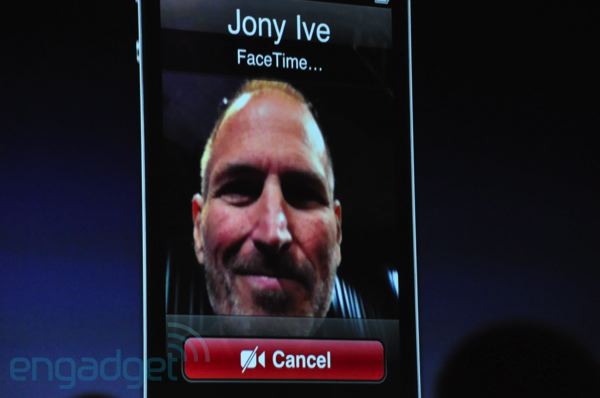 Jobs’s “One more thing”; the afore-mentioned front facing camera was also used for video calling at the conference between Jobs and iPhone designer Jonathan Ive. Called FaceTime, it’ll be a Wi-Fi only feature to begin with, only compatible iPhone 4 to iPhone 4. No set-up will be required, and it’ll work in both landscape and portrait orientations. Wi-Fi only? Seems that 3G carriers aren’t too keen as yet. Probably still a bit burned from the last time they pushed to make video calling “the next big thing”. FaceTime may well end up being more of a FacePalm at this rate…

There’s two colours, white and black. Prices for the iPhone 4 are $199 for 16GB, $299 for 32GB. Pre-orders start from the 15th June, shipping in 5 countries including the UK, hitting 18 more territories in July. That means the iPhone 4 should be hitting the UK by June 24th.

So, was it worth wait for some official confirmation? Or just a run down of pretty much everything you already knew and/or expected? Gotta admit that the gyroscope was straight out of left-field! Let us know in the comments below.