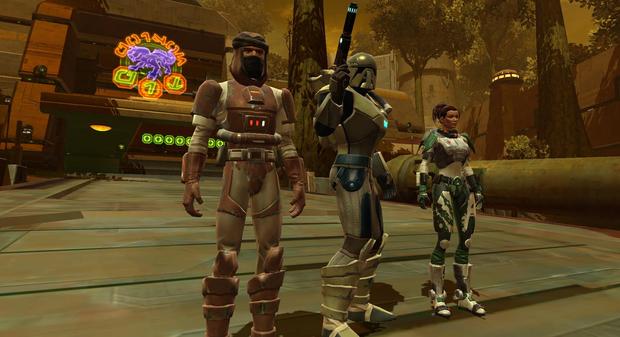 Somewhere a long time ago, in a galaxy far, far away, Bioware have actually gotten around to releasing their highly anticipated Star Wars: The Old Republic MMORPG. While we were left no clearer as to when the game will eventually be released, yesterday Tech Digest got to have a hands-on session with the Bounty Hunter character class.

Being thrown straight in with a pre-made level 6 Bounty Hunter, I hit the ground running with SW:TOR. The interface will be very familiar to any World of Warcraft veterans, with an action bar sitting at the bottom with buttons for each of your class’ powers, inventory, mission log and character info, among others. We weren’t shown any UI customisation options during our test, but particularly liked the full screen world map that was opaque when we were static, but became transparent as our player moved, giving us a glimpse of the gameworld as we travelled around.

The Bounty Hunter is a ranged class, with abilities that any Star Wars fan will spot have been lifted straight out of Boba Fett’s bag of tricks. There are six abilities available to low level Bounty Hunters including the close range DoT Flamethrower attack, AoE Missile Blast and status-specific Rail Shot, which can only be pulled off on incapacitated enemies. Moves are tempered by your gun’s tendency to overheat if overused. It’s basically a mana-bar in reverse, halting your use of the most powerful moves if it fills up. A Vent Heat power can be used to circumvent this once a minute. Our play test took place in the swampy region called Jiguuna, home to two warring parties; a Hutt named Nem’ro and the indigenous Evocii tribe. It was a sprawling area with plenty of easily-defeated low level mobs but, as it stands in this preview build at least, very few interactive NPCs.

We headed through the murky region to Nem’ro’s palace, complete with Cantina and dancers, where we picked up our first quest; to claim the head of a particularly bothersome Evocii leader and wipe out a few of his chums for good measure. Picking up the quest allowed us to see the branching dialogue choices that Bioware hope will drive the solo play of this MMO, which is claimed to have a far greater focus on plot than any MMORPG that has gone before it.

With a selection wheel similar to what’s been used to great effect in the Mass Effect series, you essentially have a choice of good, evil and neutral responses to every line of dialogue in SW:TOR. We’re told there are 50 novel’s worth of dialogue in the final game, and from what we’ve seen so far it matches Bioware’s high standards for voice acting. It also means you can complete some quests through diplomacy rather than violence, as was demonstrated by the Evocii chief’s plea to take the head of one of his fallen allies instead of his own son’s. We refused, naturally (we were playing as a bad-ass Bounty Hunter, what did you honestly expect?!) and took his bald head back to the crime lord. Graphically, I was a little disappointed by how modest SW:TOW looks. Of course there is still a long way to go until its retail release with some objects just place-holder graphics, and I’m aware that MMO’s never really push the boat out graphically in order to keep latency levels low and potential players as high as possible, but SW:TOR looks no more impressive than Warhammer Online looked when it launched around two years ago. It may have been a particularly dreary area we we’re thrust into, but the heavy mix of browns and greens didn’t particularly evoke our happiest memories of the Star Wars franchise.

Likewise, Jiguuana felt a bit empty. We’re sure there is plenty of content yet to be added, but with a lack of interactive NPCs or resources to be gathered through crafting skills, this early section only really held waves of mobs to grind through, and very little else. While I’ll reserve my inkling that SW:TOR may still be unnecessarily hanging onto some archaic MMO mechanics, the grind still seems to be substantially padding out the experience.

If I’ve seemed overly critical here of Bioware’s Star Wars MMO, I don’t mean to be. It’s still very early days yet for the game, with 100s of hours worth of gaming yet to be revealed. It’s just that with anticipation for the game so high, and the weight of a beloved franchise on their shoulders, Bioware may have bitten off a bit more than they can chew. By playing the same overly familiar cards that made World of Warcraft so popular, Bioware may not be able to do the Star Wars universe and their own lofty ambitions justice.