There are plenty of games that attempt to make you feel like the star of your own action movie, but few have done it with as uproariously fun results as Just Cause 2. Or with explosions as big and as frequent for that matter.

Take this scene for example, typical of what to regularly expect from Just Cause 2; you’re hurtling through dense jungle on the back of a motorcycle headed for a despotic government installation a few hundred miles away, when you spot a passenger plane soaring up over your head. You stand upright on the motorcycle, surf-board style, and open your parachute, catapulting you towards the plane. Within reaching distance of your arm-mounted grappling gun, you reel yourself into the plane and hijack it in mid-air. After a few minutes taking in the sights thousands of miles below, you spot the enemy base, set the plane on a collision course with the installation’s fuel tankers and bail out just in time to see the whole place explode and crumble as you parachute to safety. 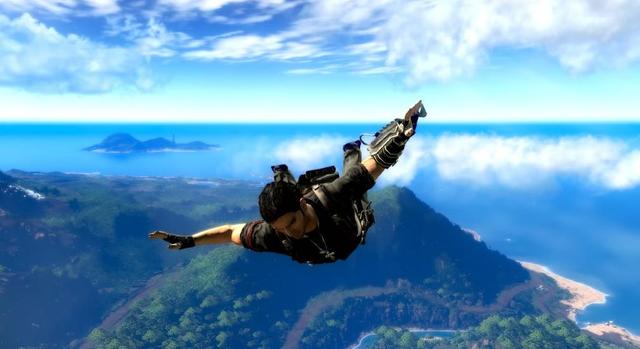 It’s all in a day’s work for the game’s hero Rico Rodriguez, and all possible within a few minutes of picking up the controller in Just Cause 2.

There’s a loose and ridiculous story holding all this together. Agency Special Agent Rico Rodriguez is out to find his old mentor, Tom Sheldon, who has gone rogue somewhere within the fictional South-East Asian archipelago or Panau. Rival gangs vie for power in Panau, and Rico will have to play each group off of each other to get to his mysterious mentor.

It’s all very tongue in cheek and more an excuse for a string of set pieces than any intricate tale of intrigue. Voice acting can be excruciatingly clichéd (sometimes bordering on racial stereotypes), though in the context of the ludicrous action surrounding it, it all sort of works, in a straight-to-video sort of way. 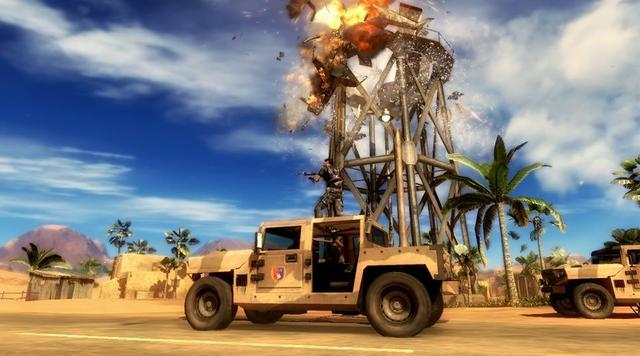 But there is nothing straight-to-video about the scale of Just Cause 2. Panau encompasses some 400 square miles to be freely explored, with terrain ranging from expansive deserts to lagoons and icy mountains. While up close it’s graphically rather average, take to the skies in Just Cause 2 and you’ll see what the detail has been compromised for; there is an absolutely breathtaking draw distance, with the island stretching as far as the eye can see. It makes base jumping a really exhilarating experience as the ground miles below you rushes into focus.

One of the biggest failings of the original Just Cause was that its equally huge gameworld felt a little dead. It was underpopulated and lacked many meaningful areas to explore. This has been vastly improved upon in the sequel. There are hundreds of unique locations to visit, each packed with explosive opportunities to wreak havoc. From a members-only club aboard an airship to a massive satellite dish, Just Cause 2’s locales are often inventive and always interesting.

This is in part thanks to the new mission structure. There’s a central mission thread, along with side missions dished out from the gangs, which include street races and stronghold takeovers. To progress to newer missions and to unlock better equipment however, you have to accumulate the in-game currency, Chaos. This is achieved by, well, causing chaos; taking out enemy soldiers, performing vehicle stunts, and generally blowing stuff up in the most extravagant ways you can think of. Which is obviously a blast. It encourages experimentation, and given the more varied environments, there’s never a dull moment. Admittedly some of the side-missions unlocked do become repetitive, and we encountered a few too many cases of ropey friendly AI, but it’s a considerably more compelling set-up than was present in the original. 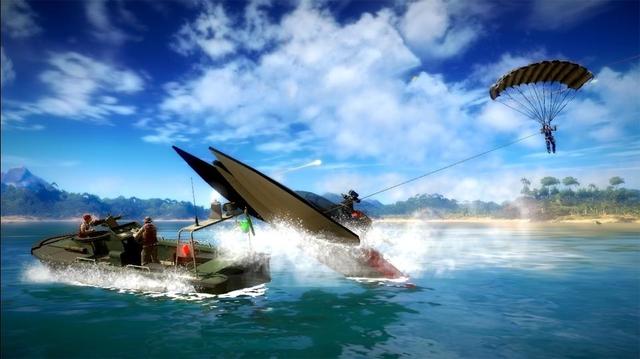 Movement in general has been refined, be it in vehicles or combining Rico’s grappling hook and parachute to sling-shot yourself around Panau. There are over a hundred different vehicles to play about with, from road-based motors to planes and speedboats. Each handles differently, and thankfully, given the context of the game, play liberally with real-world physics. You’ll regularly flip cars a couple of times and still speed off into the distance unscathed, which all adds to Rico’s bad-ass style rather than detracting from it.

And while the grappling hook is great for zipping around at speed like a Latino Spiderman, it really comes into its own in combat situations. Here’s where Just Cause 2 really shines, totally putting the recent Bionic Commando reboot to shame. Rico can use the grappling hook to pull snipers from guard towers, tie enemies to lamp-posts, or pull two enemies together for comical slapstick collisions. It can lead to some laugh out loud moments too; tethering an enemy to a flaming gas canister and then watching it rocket off towards the sunset dragging the bad guy in-tow always raises a devilish smile. 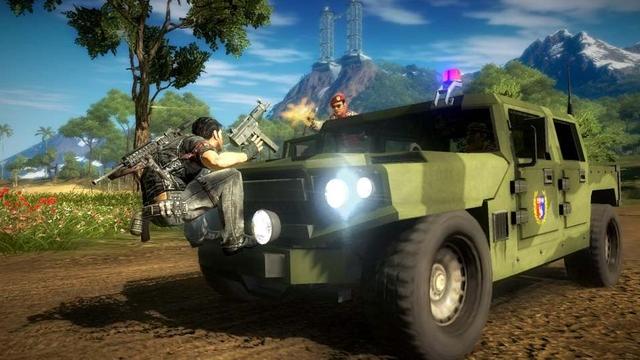 However, if there is one weak link that really pulls the game down, it’s the gunplay. There’s plenty of variety, from dual-wielded pistols to heavy-gatling guns, and they all pack a satisfying punch. But it’s all literally a bit hit or miss; there is heavy-handed auto-aiming applied to your shots, which is fine when surrounded by many foes, but seems to almost actively discourage any sort of precise aiming. The lack of a cover system is also a shame, as Rico cant really soak up that much damage before taking a fall.

All in though, it’s an impressive turn-around for Avalanche Studios. They’ve turned a decidedly average series into a real contender. Anyone who found the more realistic direction the Grand Theft Auto games have recently taken to be a bit disappointing will find a lot to love here. It’s still far from perfect, but Just Cause 2 can sit proudly at the top of the pile marked “Guilty Pleasures”.