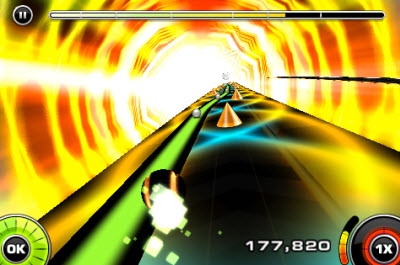 Taplulous’ Tap Tap Revenge iPhone app proved a surprise success, taking on the rhythm gaming big-guns like Guitar Hero and Rock Band and beating them at their own game. Tap Tap Revenge proved wildly popular, and now Tapulous are looking to replicate that success with the new Riddim Ribbon game.

A cross between a racer and music mixing app, players use the iPhone’s accelerometer to roll a ball down a sloping circuit to a soundtrack by the Black Eyed Peas. Hit an obstacle and the music track grinds to a halt, but take alternative routes and you get a brand new mix of the song.

So far the game is set only to include three Black Eyed Peas songs: Boom Boom Pow, Meet Me Halfway, and I Got a Feeling. Remember though that Tapulous have a reputation for releasing new content for their iPhone games, so if the Black Eyed Peas aren’t your cup of tea there’s a good chance other artists may get thrown into the mix later on.