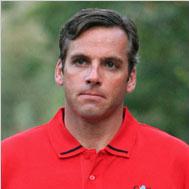 Myspace CEO Owen Van Natta has stepped down from his position after just one year at the trailing social network.

Brought in by Myspace owners News Corp to revitalise the service four years after their $580 million purchase in 2005, Van Natta’s attempts to make Myspace more music-orientated did little to quell the fierce competition from Facebook.

News Corp have replaced him with Mike Jones and Jason Hirschhorn as co-presidents, who also joined MySpace back in April 2009 with Van Natta.

“Owen took on an incredible challenge in working to refocus and revitalize MySpace, and the business has shown very positive signs recently as a result of his dedicated work,” said News Corp Digital Media CEO Jon Miller

“However, in talking to Owen about his priorities both personally and professionally going forward, we both agreed that it was best for him to step down at this time. I want to thank Owen for all of his efforts.”

I’d say that that roughly translates from Newspeak into English as “Facebook is still number one, Google Buzz is moving in on the scene, we’re losing ground and Van Natta wasn’t cutting the mustard”, wouldn’t you?