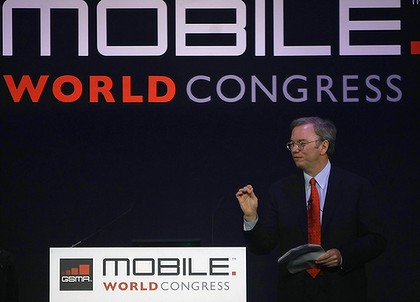 A wave of change is on its way at Google HQ, if their MWC 2010 keynote speech is anything to go by. According to CEO Eric Schmidt, mobile software will be taking precedence over PC software in Google’s roadmap.

“The phone is your alter ego,” Schmidt said. “It doesn’t think as well as we do, but it has a better memory. It has a better notion of where we are, and can take pictures. This really gives us an opportunity. It’s time to get behind this. What I would suggest now is that the new rule is ‘mobile first’. Mobile first in everything.”

As well as demoing new translation tools, Schmidt revealed that the mobile gamble was beginning to pay off, with over 60,000 Android packing smartphones selling every day.

“The job here is to create magic, and put that all together in ways that make people think ‘oh my god, how did I live without this before'” he continued.

This shift in focus will see Google software début on mobile platforms before desktop PCs “At Google our programmers are working on things mobile first,” Schmidt confirmed. “Of course we’ll have a desktop version, a high quality version, because our customers love them, but we’ll also have one on mobile phones. The top programmers want to work on those programs; it’s more human, more personal, more satisfying to them.”

It certainly sounds a risky venture, but the quality of the Android OS means that Google’s mad-cap plan may yet prove a success.