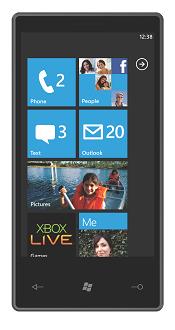 The Microsoft 2010 press conference has revealed the WinMo 7 OS, just as expected. What wasn’t perhaps so expected was just how drastically different it was to previous Windows Mobile offerings.

“This really is about the phones and how consumers will react to these devices.” said Steve Ballmer.

And so gone from the homescreen is the Start Menu and shortcuts; WinMo 7 instead uses Live Tiles. These tiles can update content from the web automatically on your homescreen, allowing instant access to social networking streams from friends, web photo albums or your email. Windows Live and Facebook integration are in, too.

Multi-touch finally rears its head on Windows phones. Ditch those styluses and start pinch zooming away then with Windows 7. Microsoft’s UIs in the past have been pretty dire when it comes to touchscreen devices. Looks like that’s all been tidied up nicely.

The Bing search tool will be tied into what it considers the most relevant information for a mobile user. For instance, a Microsoft rep at the conference searched for “sushi”, and rather than listing a definition of what sushi is, it instead listed all the local sushi restaurants nearby, with reviews and contact details needed for booking all shown.

Zune will be thrown into the mix too as a dedicated media player/store that will act much the same as iTunes does.

Other new additions are “Hubs”. These act as specific homepages for particular groups of content such as photos, music, people, games and video. Content isn’t limited to what’s stored locally on your phone either, with images and songs from the cloud available too.

Finally making an appearance is Xbox Live integration. You can check gamerscores, profiles, send messages and get key gaming info on your phone. Though they’ve yet to be announced, you can bet your bottom dollar that mobile games tied to Xbox Live accounts are on the cards.

Windows Mobile 7 will be landing by Christmas of 2010. Let the countdown begin.