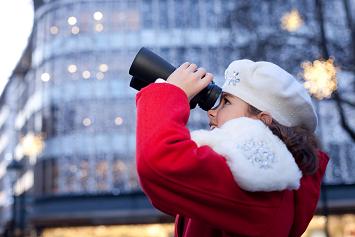 I don’t quite know whether to believe this story or not, but it’s very sweet nevertheless so let’s run with it. Apparently, according to John Lewis, sales of binoculars have increased 600% over the period of a week.

The reason? According to John Lewis it’s because children want to look out for Santa as he crosses the skies delivering presents. Says Justine Burgess, buyer for imaging at John Lewis. “We have identifed a continuing trend where sales of binoculars spike the week before Christmas Day.”

Pictured is Molly Baker looking out for Santa Claus in London’s Sloane Square using a pair of Nikon Action EX binoculars, priced at £167. Offering 12 x 50 magnification they also feature a long eye relief design so you should be able to make out Santa’s reindeers and even sleigh bells.