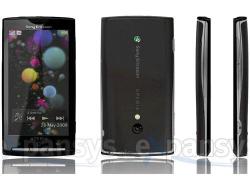 Set to hit stores in the first half of 2010, the Sony Ericsson Xperia X10 will be Sony’s first Android based phone.

Previously codenamed Rachael, the Xperia X10 looks to “truly humanise the way people interact with their phones”. Its UX platform builds upon the Open OS, and aims to be a feature-rich entertainment and social media handset.

The Xperia X10 will introduce two new bespoke applications, Mediascape and Timescape. Mediascape collates all media available to your phone, conducting searches not just through your stored files, but also from places like YouTube, giving you pretty unrivalled media access on the go. Timescape does a similar task, but with your contacts, pooling their email addresses, photos, phone numbers, Twitter and Facebook accounts together in one place.

Users will also be able to but new apps from a number of different stores, including PlayNow and the Android Market.