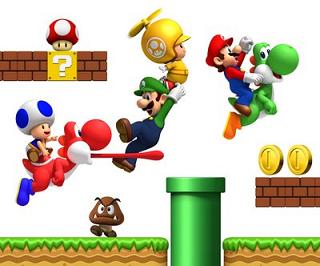 It has been over 25 years since Mario first stomped his way onto home consoles and into our hearts. Super Mario Bros for the NES was so complete an adventure, replete with secrets and pinpoint-precise controls that it is as joyous to play today as it was when it was first released. Paying homage to that pedigree ancestry, New Super Mario Bros Wii is another near-perfect running, jumping, red-shell throwing trip down memory lane.

In what is essentially an evolution from the retro stylings of New Super Mario Bros on the DS, Mario and co. once again have to rescue Princess Peach, kidnapped by nasty Koopalings on her birthday. 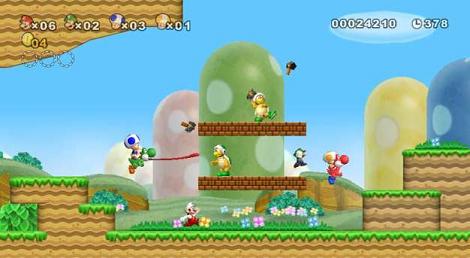 Holding the Wiimote horizontally in both hands, players run and jump from left to right on a quasi-2D plane, avoiding obstacles and head stomping on baddies. It’s simple and devilishly fun, but also devilishly hard. New Super Mario Bros. has an uncompromising approach to tricky level design, ramping up the difficulty almost as soon as you leave the first world. However, thanks to (for the most part) solid controls and exuberantly inventive level design, dying never feels cheap or too frustrating. If it does get all a bit too much for you, a ghost-mode Super Guide revealing the safest path through levels is always an option.

Along with the familiar mushroom, star and fire-plant power-ups, there is also a handful of excellent new gear at Mario’s disposal. The penguin suit allows Mario to swim quickly through water and glide across ice, the propeller suit allows him to soar through the air, and the plumber can now also lob balls of ice to freeze baddies. All are implemented well into the strong level design, helping you discover secrets and never feeling merely tacked on. 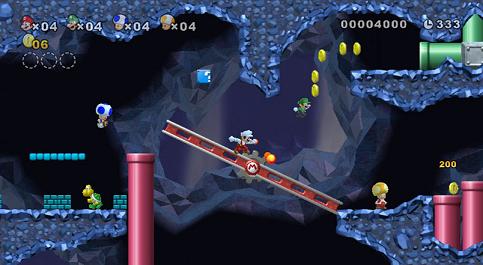 Certainly the most notable addition is the inclusion of four-way simultaneous multiplayer modes. Taking control of Mario, Luigi, Blue Toad and Yellow Toad, you can work together to reach the end of the level by throwing and bouncing off each other. It works remarkably well, and really comes into its own in the chaotic Coin Battle mode, with gamers competing across a level to grab the most gold.

There are some small issues that do mar gameplay however. The now mandatory inclusion of motion controls, here used to pick up objects and execute spin attacks, often feels clumsy and imprecise in a game which relies on total accuracy of control. Also, playing with inexperienced friends in multiplayer can lead to frustration, as well planned jumps are blocked by over enthusiastic first timers causing untold annoying deaths.

On the whole though, New Super Mario Bros. Wii is a top class game. Charming visuals, simple yet challenging gameplay and a brand new, successful multiplayer option all combine to give a refreshing spin on a classic formula.